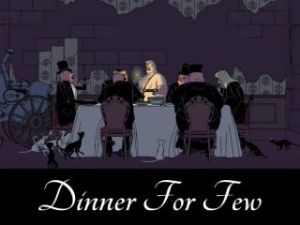 Greek American animator Nassos Vakalis brings to the screen Dinner for Few, a sociopolitical metaphor and satire of the Greek crisis in the shape of an animated 3D movie.

After being a hot topic globally for the last five years, the Greek crisis has now been immortalised in Hollywood cinematography, as esteemed Greek American animator Nassos Vakalis ventured out to make Dinner for Few, a short film inspired by the Greek crisis.

After the international success of his acclaimed short animated film Human Nature, Emmy award winning animation artist Nassos Vakalis brings onto the screen another original story, in the shape of a 10-minute animated 3D short film with a deeper, darker and more ambitious subject matter.

Described as a sociopolitical metaphor of the world as we know it today, the Dinner For Few is a story without dialogue.

The characters – the Judge Pig, the Banker Pig, the Politician Pig, the Priest Pig, the Media Pig, the Butcher – are both players and victims in a system that runs like a well-oiled machine, constantly feeding the ones that foolishly consume all the resources of the ecosystem, while others – the Cats (the people) are only fed by left-overs or what has fallen off the table.

Inevitably, the exhausted and old vicious circle comes to a catastrophic, messy and violent end. Sadly, its offspring is not a sign of hope but the spitting image of the parent.

With some inspiration taken from George Orwell’s book Animal Farm, in Dinner for Few it is the pigs who elevated themselves to positions of leadership.

“I think, since that book, the pig has become synonymous with greed and corruption. The idea of the cats came from the Greek tavernas. Anyone who has been in an open space taverna in the Greek countryside knows of the street cats wandering around the tables asking for food. The tiger is a manifestation of the cats as they rebel, and become an unstoppable force. The human, or the Butcher as I call him, is the only character that has a human but brutal form,” Vakalis said in a recent interview.

Born and raised in Athens, Nassos Vakalis has come a long way since he began his work as a cartoon and graphics artist at a small studio in Greece’s capital city. Now an animator for DreamWorks Studios in Los Angeles, his talents have also been recognised by other major Hollywood studios including Warner Bros and Paramount, among others, where he’s worked on films such as Quest for Camelot, Joseph: King of Dreams, Spirit: Stallion of the Cimarron and others.