ΚΕΦΙ: a Greek word that can’t be translated 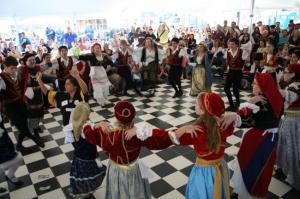 For a non-Greek person, the word κέφι (kefi) is hard to translate as there is no direct English equivalent, with most dictionaries generally describing it as the spirit of joy and an overpowering emotion filled with passion and enthusiasm.

For Greeks though, κέφι encompasses a whole overwhelming soul and body experience that’s expressed through laughing, dancing and singing; it’s the connection with other people and a way to deal with pain and hardships whilst achieving a carefree moment of ultimate happiness.

For many Greeks or those who have had the opportunity to find themselves in Greece, κέφι is even linked to the custom of smashing plates at a Greek ταβέρνα on a warm summer night.

After all, who doesn’t remember the 1964 British-Greek comedy-drama film adaptation of Nikos Kazantzakis’ novel ‘Zorba the Greek’, produced and directed by Cypriot Michalis Cacoyiannis starring Anthony Quinn as the title character, in which a middle aged Greek with a real lust for life, disturbs the joyless existence of an aimless English writer who visits the Greek island of Crete and experiences how the Greeks deal with pain, loss, failure and hardship whilst he discovers the earthy pleasures this small country has to offer.

“You’ve got everything, except one thing; madness,” says Zorba to his English friend in one of the movie scenes.

“A man needs a little madness. Every day cut the rope and be free.”

Although hard to define, κέφι takes many forms, but is usually associated with the expression of positive emotion and is thought out to be the secret to temper the tribulations of life and the Greeks’ own cynical and sceptical nature.

In other words, κέφι is the desire to take the pain away and turn it into joy.

Inspired by his recent trip to Greece, Greek-French comedian Alexis Arabia, whose maternal family originates from Messolonghi, in Western Greece, decided to visit his mother’s homeland with a camera on hand and interview people asking them one very simple question.

“What does the word κέφι mean to you?”

“My aim was to introduce and bring the meaning of this unique word to the French people first and hopefully to the rest of the world,” says the 26-year-old artist who studied International Commerce but subsequently changed career paths as he was determined to follow his dream and become a comedian.

“There is not enough of a Greek element in France as it is in the U.S.A. and Australia, but through the videos on YouTube and my comedy show, I wanted to literally ‘spread the word’ so that everyone can feel joyful and happy and adopt the philosophy of experiencing κέφι in their lives.

The four-minute-long video was shot in Messolonghi and Paris last summer and also features Greek-French journalist and entertainer Nikos Aliagas.

“I loved going around interviewing every-day people about this almost culturally embedded idea of staying positive and euphoric, even during the most challenging and difficult times and I also interviewed Nikos Aliagas who is a true representative of our culture,” says Alexis.

“Κέφι is a philosophy; it is a small sparkle that doesn’t last eternally but gifts us the true state of happiness even if it’s for a moment or a night. It’s a feeling we want to share with each other,” says Nikos Aliagas on the video.

“Κέφι is the desire to simply prolong your existence, by removing the stress and struggles of everyday life.”

Since uploading the video, the overall response has been nothing but positive and Alexis has been inundated with messages from all over the world.

“The feedback on this particular video has been incredible and the comments and shares on social media have been overwhelming. The majority of French people cherish the Greeks. I experience this love on a daily basis through my followers on social media who write messages of support and love for the country,” says Alexis revealing that most people watch the video and then find the strength to confide in him about their sorrows and thank him for putting a smile on their faces with his heart-warming four-minute gesture.

“I sincerely hope that the video we have made will make all Greeks feel proud of their heritage and will spread joy to the rest of the world,” concludes Alexis.

You can watch the video here: https://m.youtube.com/watch?feature=youtu.be&v=_fUThbi_FCc 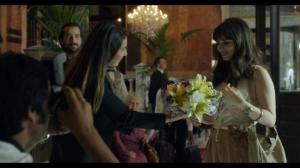 The Greek Film Festival is one of the oldest film festivals in Australia, and it turns 24 this year. Being staged nationally, the Palace Cinemas Adelaide component features five films in five sessions over four days of eclectic Greek cinema at Palace Nova Eastend Cinemas from 12-15 October (presented nationally by Delphi Bank).

Adelaide’s opening night gala is being held on Thursday 12 October at Palace Nova Cinemas. Greek cinema lovers will feel the vibe at the launch with the opening blockbuster film Roza of Smyrna, a ‘Greco-Turkish Romeo and Juliet’ based on the novel Ismael and Roza by Giannis Gianellis and featuring two original songs by Haris Alexiou.

As we prepare for the film event of the year, here’s a quick look at this year’s films.

A captivating film, Roza of Smyrna brings the story of an enigmatic old woman Rosa from Izmir who lives for decades with the weight of a well-kept secret. An avid collector of Greek objects in Asia Minor, Dimitris, prepares an exhibition in a renowned museum in Athens on Culture of Nationalities who cohabited in Izmir before the genocide. In a trip to Izmir with the curator of the museum and his girlfriend Rita, he accidentally finds in a small antique shop a Greek wedding dress that is stained with blood. An old photograph, a wedding dress soiled with blood and a letter, become the reason to retract their story from the past.

A professor of criminology tries to solve five completely unrelated murders whose only link is quotes from Pythagoras. Alongside him on this journey is a maths professor. Will they manage to solve this mystery? An intense thriller that will have you on the edge of your seat!

A mistake made by the bride rejoins 4 old friends of disaster and a father in law! 5 guys go to Thassaloniki to tear everything down. A father in law gets in a hearse in order to kill a love in the making. An ex-girlfriend dances tango with her memories as a partner. A cancelled wedding and a relationship that starts with the brides vail floating at the wind of independence.

A love letter to the island of Crete, this gentle Mediterranean pick-me-up posits a back-to-the-land solution to Greece’s economic crisis and boasts breathtaking cinematography, haunting, original music and mouth-watering food and wine.

During World War II in Greece, under the submission of Germans, one Christian, Giorgos, falls in love with a Jewish lady named Estrea, something completely forbidden. Can they and their families overcome all the obstacles, along with racial discriminations and hardship? The story mainly takes place in an ouzeri, in which Tsitsanis works, one of the greatest Greek composers, librettists and singers of the 20th century.

Thessaloniki to name square after Melbourne

Vic Gov’t thanks the Thessalonian Council for its ongoing commitment to promoting the sister-city relationship.

Following an idea that was first suggested to the City of Thessaloniki by Melbourne’s Thessaloniki Association The White Tower, Greece’s second largest City Council has passed a resolution to name one of its squares after Melbourne.

Neos Kosmos had previously reported that the Executive of Thessaloniki City Council convened on 23 Aug 2016 to discuss a proposal by the Mayor Mr Y. Boutaris regarding the revamping and naming of a site in Melbourne’s sister city, to honour the at the time 32 year old relationship.

After much deliberation the City Council unanimously decided to name the park in Anagennisis Street, in Thessaloniki (close to the port) “Melbourne Square”.

“On behalf of the Victorian Government, I thank the City Council of Thessaloniki for its ongoing commitment to promoting even closer ties with our state,” Premier Daniel Andrews enthused.

“Victoria’s long-standing and close relationship with Greece is underpinned by a proud diaspora and strong cultural ties. We are the home of Greek culture in the southern hemisphere and home to the largest Greek community outside of Greece,” he stated.

Northcote-based Thessaloniki Association once again thanked the City of Thessaloniki Council, for its generosity that will further unite the two port cities on different parts of the world and “tell the visitor that there are Thessalonians in Australia and particularly in Melbourne who never forget their origin”.

“[Melbourne Square] will tell the visitor that Australia is a beautiful country and Melbourne is a wonderful city, many times voted the most liveable city in the world; to tell the world that Greek-Australians are proud of the city they live in but never forget their heritage,” the members of the association commented.

Speaking to Neos Kosmos, Bill Papastergiadis, President of the Greek Orthodox Community of Melbourne and Victoria agredd that this comes as “great news”.

“Such announcements are vital to the broadening of the relationship between the two countries and cities. The announcement involves an acknowledgement of the shared history between the two sisters cities. Equally, the acknowledgment will act as a catalyst to the opening of a dialogue on the important places for both countries. Through this dialogue, research and exchanges can be developed. Congratulations to the President of the Thessaloniki Association and to the Mayor of Athens for this great announcement.”

Meanwhile, MP for Oakleigh Steve Dimopoulos said that all melbers in his electorate and the Victorian parliament “are very delighted about this announcement and we believe it is extremely significant for the relationship between our two countries and our two cities.”

Finally, member for Bentleigh Nick Staikos added that it was an honour to “join my colleagues Member for Oakleigh Steve Dimopoulos, Member for Narre Warren South Judith Graley and Member for Yuroke Ros Spence in Thessaloniki in July where we visited the site of Melbourne Square and met with the City Council”, stressing that the square is an appropriate recognition that the heart of the Hellenic Diaspora beats loudest in Melbourne.