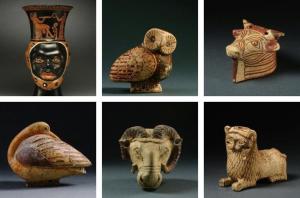 Some of the ancient artefacts seized from the home of Michael H. Steinhardt. Photo: New York Times via New York District Attorney’s Office

Greek authorities will be seeking to repatriate the valuable art works

A number of antiquities prosecutors believe to have been looted from Greece and Italy have been seized from the office and Manhattan home of billionaire Michael H. Steinhardt, which was raided on Friday afternoon.

A hedge-fund manager and philanthropist, Mr Steinhardt has close ties with the Metropolitan Museum of Art, where one of the galleries is in fact named after him, and has been an avid collector of ancient Greek art for some three decades.

At least nine pieces from his private collection were seized, as part of Manhattan district attorney Cyrus R. Vance Jr.’s efforts to repatriate looted antiquities to their countries of origin.

According to a press statement issues by Greece’s Ministry of Culture, authorities have full intention of seeking to repatriate the items back to Greece, and that they are awaiting a formal briefing from their US counterparts to commence the necessary procedures.

Among the items, reports have revealed the discovery of an ancient Greek oil vessel depicting a funeral scene, which dates back to the 5th century B.C. and has an estimated worth of at least US $380,000 (AUD $484,633).

To ensure the items are returned to Greece, authorities will be submitting comprehensive evidence to prove their origins.