CHINESE Government entity Yancoal will have the right to appoint the chair, two directors and potentially the chief executive of Port Waratah Coal Services after the greenlighting of Yancoal’s $3.3 billion purchase of Rio Tinto’s Hunter coal assets.

The largest acquisition of Australian assets by a Chinese Government-controlled company will give Yancoal a powerful hold on key elements of the Hunter coal chain.

This will include ownership of some of the region’s largest mines and a 36.5 per cent strategic stake in Port Waratah Coal and its Carrington and Kooragang terminals, in addition to Yancoal’s existing 27 per cent stake in Newcastle’s third coal terminal.

The Foreign Investment Review Board recommended the deal go ahead after blocking Chinese bids for the Kidman rural empire and the $10 billion Ausgrid sale, while greenlighting smaller renewable energy projects.

Yancoal’s existing Hunter assets are the giant Moolarben mine between Denman and Mudgee, which could produce 21 million tonnes of coal per year, and the much smaller, suspended or troubled mines at Ashton, Austar, Stratford Duralie, Abel, Tasman and Donaldson.

The purchase “appears to demonstrate a level of confidence in the ongoing presence of the industry in the Hunter region”, Mr du Plooy said, although there were important steps that had yet to be met including raising funds for the deal. Yanzhou is reported to be willing to invest $US1 billion of fresh equity into Yancoal Australia.

“In terms of the transaction, there’s quite a bit still to go,” Mr du Plooy said.

The Yancoal deal comes three years after the Westpac-backed Hastings Fund Management and the Chinese Government’s China Merchants paid $1.75 billion for a 98-year lease of the Port of Newcastle in a 50/50 joint venture in 2014.

While the deal would give Yancoal considerable clout in the Hunter coal industry, the company would remain a customer of Port Waratah Coal Services, which operates under the Long Term Commercial Framework agreement approved by the Australian Competition and Consumer Commission.

Yancoal has an existing 12 million ship or pay contract with Port Waratah Coal, and a $2.5 billion, 27 per cent stake in the Newcastle Coal Infrastructure Group’s third terminal where it has a contract to ship 14.6 million tonnes annually.

Hunter MP Joel Fitzgibbon welcomed Yancoal’s investment in the Hunter “which comes at a time when some of the better-known multinationals are divesting their coal interests”.

“I’m confident Yancoal understands that maintaining Coal & Allied’s workforce will be key to a healthy return on investment. For me, it’s all about jobs,” Mr Fitzgibbon said.

Australia Institute economist Rod Campbell said Yancoal gaining influence within Port Waratah Coal Services “could be great for Hunter mining, as they aren’t as beholden to the mates club that is big coal in Australia”.

“This means they could speak out against the biggest threat to NSW coal – the subsidisation of Adani’s infrastructure and huge volumes of new thermal coal going into seaborne markets from the Galilee Basin in Queensland,” Mr Campbell said.

“Glencore has spoken out about the madness of subsidising Adani, and even (Queensland Resources Council chief executive) Ian Macfarlane admits that many of his members aren’t happy. This could put Yancoal in a position to defend Hunter coal as Rio has never been prepared to do.”

Yancoal gaining influence within Port Waratah Coal Services could be great for Hunter mining, as they aren’t as beholden to the mates club that is big coal in Australia. – Australia Institute economist Rod Campbell.

Camberwell resident Wendy Bowman, who refused to sell her property to Yancoal and won two court cases that stopped its Ashton South East open cut expansion, questioned whether the deal would go ahead, and whether Yancoal’s history of mine operations in the Hunter was positive.

“They haven’t been anywhere near me since the court cases. They haven’t tried to talk to me because they know if I sold that would be the end of everyone from here to Maison Dieu. They own mines in the Hunter but it’s not exactly a great record they have here,” Mrs Bowman said.

If the deal goes ahead Yancoal will have its giant Moolarben mine in addition to large stakes in Hunter Valley Operations and Mount Thorley Warkworth. In 2016 Rio Tinto’s production share in those mines was 17.1 million tonnes.

Under Rio Tinto’s obligations under the HVO joint venture agreement with Mitsubishi, Yancoal Australia will also make a “tag” offer to Mitsubishi to acquire its 32.4 per cent interest in the Hunter Valley Operations mine.

Rio Tinto has announced or completed at least $7.7 billion of divestments since 2013, including the sale of its interests in the Bengalla coal mine and Mount Pleasant coal project in the Hunter.

He described the purchase as an “opportunistic move” by Yancoal on the back of Rio Tinto’s effective exist from thermal coal across the globe.

“Obviously some read the transaction as a Chinese Government endorsement of the NSW thermal coal export industry, which in part it is,” he said.

“But Yancoal’s track record on acquisitions this decade is less than stellar. I think it is more of an opportunistic move for a company in a domestic Chinese industry that is contracting, to look offshore for growth, facilitating the global industry rationalisation in the process.

“China’s central government has given a clear mandate to the strategy of ‘going global’, and this transaction is another set in that process.”

The Missing Australian Soldiers from the Battle of Vevi

Members of the Australian 2/1st Anti-Tank Regiment resting, 13 April 1941, after their withdrawal from the Vevi area.

Former NT Minister Peter Toyne and Historian Tom Tsamouras will present a lecture entitled ‘The Missing Australian Soldiers from the Battle of Vevi’, on Thursday 20 April, at 7:00pm, at the Ithacan Philanthropic Society as a part of the Greek History and Culture Seminars, offered by the Greek Community of Melbourne.

The first action during the Second World War on Greek soil between the German and Hellenic forces was on the little village of Vevi in the municipality of Florina. This began on 11th April 1941 and marked the first of numerous clashes during which Hellenic and ANZAC forces fought side by side! After the “Battle of Vevi”, a small number of soldiers from the two Australian battalions that fought there, were reported missing in action and their bodies have never been found. Information by locals to Australian Brigadier Keith Rossi in 1981 about the possible grave site of these missing men has led to many people from Greece and Australia researching about the possible grave site of their remains. Tom Tsamouras, a school teacher from Newcastle and Peter Toyne, former MP from the NT, are two researches who have spent years trying to locate the resting place of these men.

Tom Tsamouras was born in Karditsa, Greece in 1962 and migrated with his family to Australia in 1969. He was educated at Hamilton Primary and Merewether High school in Newcastle and graduated from the University of Newcastle in 1983 with a Bachelor of Arts degree. In 1984 he completed a Graduate Diploma in Education through the University of Sydney and in 1986 graduated from the University of New England with a Master of Letters degree. Between 1987 and 1990 he worked in Greece teaching English as a second language. In 1992 he was appointed at Muswellbrook High School as an English/History teacher and in 1993 he transferred to Maitland High School where he teaches English to this day. In 1997 he also joined the network of Symban World Radio and produced a variety of weekly radio programmes in the Greek language until 2012. Today he lives in Newcastle with his wife Irene and three children Alexandra, George and Madeline.

Peter Toyne was born in Melbourne and early career there included 5 years of scientific research into the origins of breast cancer and then a ten year secondary teaching career. He moved to the Northern Territory in 1980 and took up various educational and community development roles in the Central Australian region over the next 16 years- all this time based in bush communities. Some of the significant projects in which he played a prominent role were the establishment of the Warlpiri Media Association, Warlukurlangu Artists, the Tanami Network, Open learning based secondary education, Indigenous adult education, development of Teaching courses through Bachelor College, and numerous smaller enterprises. In 1996 He was elected to the NT Parliament as the Member for Stuart and served for 10 years as opposition spokesperson for education. When the Labor government assumed power in 2001 he became the Attorney General and Justice Minister and later took on the additional responsibility as Minister for Health and Minister for Central Australia. He retired from politics in 2006 and now balances family life, and an active career as an artist and architectural glass designer.
When: Thursday, 20 April 2017, 7:00pm
Where: Ithacan Philanthropic Society (Level 2, 329 Elizabeth St, Melbourne) 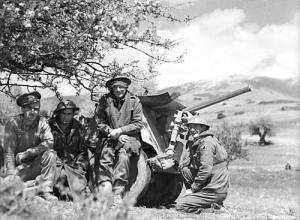 Members of the Australian 2/1st Anti-Tank Regiment resting, 13 April 1941, after their withdrawal from the Vevi area.