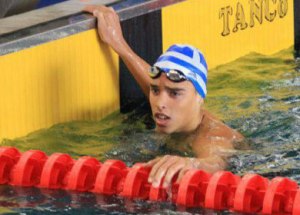 Eighteen-year-old Apostolos Christou has surprised the world of swimming by breaking the world junior record twice within 24 hours, in the process of grabbing gold at the 100 meters backstroke in the European Juniors Championship held at Dordrecht in the Netherlands.

The Olympiakos swimmer clocked 54.41 seconds in the semifinal on Wednesday to knock three tenths off the old record by Italy’s Simone Sabbioni. Then in Thursday’s final he claimed the top spot clocking 54.04, i.e. 37 seconds off his own record, while leaving Sabbioni in second.

Christou is one of the swimmers to represent Greece at the Young Olympic Games in China next month, after choosing this event over the European Swimming Championships.

He admitted that his main ambition is to make the Rio de Janeiro Olymic Games in 2016: “It’s everyone’s dream. I want to be in Brazil in two years’ time and be able to stand out.”