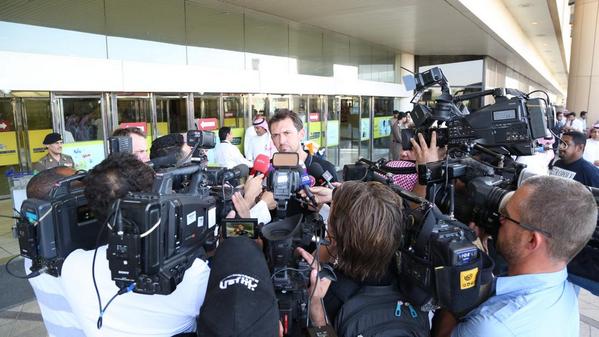 Broadcast coverage Live and exclusive coverage on FOX SPORTS 1HD & 1 from 3.55am (AEDT)

After 13 tough matches in some of the most hostile of environments all over Asia, it all comes down to this for Wanderers. In 90 minutes – or possibly 120 and penalties – one of these sides will be crowned Asia’s best. And as we saw from the first leg there is very little between these two outfits.

The big question is which team’s style will reign supreme in what will be a hostile atmosphere at the King Fahd International Stadium. Will it be Al Hilal’s slick passing and attacking approach or can the Wanderers’ disciplined defensive style hold firm? It promises to be an intriguing contest.

The Wanderers 1-0 first leg win means they only require a draw to win the title, while if they manage to score, Al Hilal will need to win by two clear goals.

The home side will be boosted by the return of veteran striker Yasser Al Qahtani, who missed the first leg through suspension.

Coach Laurentiu Reghecampf was bullish after the first leg, declaring his side would definitely win on home soil.

That confidence, coupled with his side’s impressive performance for large periods at Wanderland, means he is unlikely to make too many changes to his side for the return leg.

Given the way they performed last weekend Popovic will be tempted to stick with the same starting side again. But as we’ve learned with the Wanderers boss, nothing is ever certain.

And it would come as no surprise if he opted to use the likes of first leg hero Tomi Juric, Socceroos defender Matthew Spiranovic and playmaker Vitor Saba from the start. Striker Brendon Santalab (shoulder) is the only real injury concern for the Wanderers but he should be right to go in the biggest match in the club’s short history.

A feature of the first leg was Al Hilal’s ability to get in behind the Wanderers back four on the flanks on more than a few occasions. But their crossing and final pass almost always let them down.

The balls either missed their team-mate altogether or often found a red and black jersey there to clear away the danger. They will need more quality in the front third if they are to overturn the deficit. Composure on the big day will be key – and the pressure will be on them in front of an expectant crowd not to mention the Saudi Royal family.

Juric gave the Al Hilal defence all sorts of problems in his 30-minute cameo off the bench, ultimately scoring the decisive goal.

It’s that type of performance which might convince Popovic to go with the 23-year-old from the get-go as they go searching for a crucial away goal.

Juric might get even more space to thrive, given the home side will be chasing goals of their own. And his ability to hold up the ball will be key.

WHO’S BEEN IN THE SPOTLIGHT THIS WEEK?

He proved the difference in the first leg and it will be interesting to see if Popovic opts to use striker Tomi Juric from the start in this one.

Al Hilal’s defence struggled to deal with Juric’s pace and power and with an away goal vital to the Wanderers chances of securing the title, you would expect the Socceroos striker to be a key for the visitors.

If losing can become a habit then Al Hilal are in some bother heading into this one.

The 1-0 first leg defeat was the club’s third successive loss and a concern will be their struggles in front of goal, hitting the back of the net just once in their last three matches.

The Wanderers snapped their own two-game losing streak with their gritty victory at Parramatta Stadium. It’s not just the win that will have pleased Popovic but the return to their typical resolute defensive showing, after shipping seven goals in their two previous fixtures before that in the Hyundai A-League.

The Wanderers have scored in all but one of their six away matches in the AFC Champions League. Good omen. An away goal will be absolutely key to any notions of success.

A hostile atmosphere awaits the Wanderers with more than 65,000 expected at the King Fahd International Stadium trying to help the home side overturn the deficit.

It’s the same scenario Popovic’s side faced in the quarter-final win over defending champions Guangzhou Evergrande.

On that occasion the Wanderers lost the match but scored the crucial away goal to allow them to progress. And with basically a full squad, their key players in form and their defence re-capturing their stingy streak last weekend I’m tipping the visitors to do just enough to complete the fairytale and bring the Champions League trophy to Australi for the first time.

Two Greek banks on the brink of failure

Eurobank among Europe’s banks most likely to fail.

Eurobank and Piraeus Bank are among those most likely to fail the regulator’s ‘health check’ according to JPMorgan.

JPMorgan predicted two Greek banks – Eurobank and Piraeus – are among those most likely to fail, along with Portugal’s Banco Comercial Portugues.

European officials have just completed an extensive health check on the region’s top 130 banks and are due to reveal the results tomorrow.

The whole point is to weed out the weaklings that are hobbling the European economy, or that could spark a new financial crisis in the event of another long recession.

Regulators have been poring over bank finances, and testing whether they have the strength to withstand a nasty shock, such as a spike in loan defaults or unemployment.

The health of the sector is of vital importance for the eurozone, where growth has evaporated again and the spectre of deflation looms.

Major players such as Deutsche Bank (DB) and Santander (SAN) were among the test subjects.

Regulators will release a prognosis on each bank providing insight into how healthy the banks are now and how they could fare in the future.

If a firm is deemed too sick – meaning it wouldn’t have the resources to cope with a shock – it will be forced to submit remedies, including possibly raising more money from investors.

Analysts have been busy forecasting which banks are most at risk of failing.

Pimco portfolio manager Philippe Bodereau estimates that 18 banks will fail the tests, though he didn’t say which.