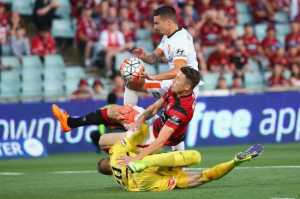 Aloisi in Wanderland hoping for his first grand final

The A-League grand finalists for this season will emerge from this weekend’s two semi-finals, the first of which was played last night in Adelaide between the Reds and Melbourne City.

Western Sydney Wanderers coach Tony Popovic will hope it isn’t a case of déjà vu when his team hosts Brisbane Roar in tomorrow’s second A- League semi-final. The last time his team played in an A-League final, was two years ago and its opponent was the Roar. That occasion was the 2014 A-League Grand Final, and the Roar dashed Popovic’s hopes of a first title win with an extra time winner.

Whilst the two teams finished neck and neck on the ladder this season, with the Wanderers finishing just ahead on goal difference, Roar had the edge head to head winning two out of the three meetings, although the first was in the season opener before Popovic’s side hit its straps.

Tomorrow, the Wanderers are again hosts, and have the added advantage of a week’s rest. Both Popovic and Brisbane coach John Aloisi have full squads available. Roar goes into the match with great confidence having come from behind late in the game to eliminate the reigning champions Melbourne Victory last week. In that game, two of its stalwarts Matt Mackay and Thomas Broich scored the goals that broke Victory hearts.

Mackay and Broich take big game, invaluable finals winning experience into tomorrow’s game, as do players such as defender Jade North, Henrique and Corona for what will be a tough away final at Wanderland. One of the key battles could be the midfield battle between the two Spaniards, Corona for Roar who is a product of the Real Madrid B team and the Wanderers’ Andreu who was born in Barcelona and played for the Barcelona B team. How effectively Andreu and co can prevent Corona from pulling strings in the heart of the Roar midfield, could have a large bearing on the outcome of this match. Victory was able to stifle Corona for much of last week’s elimination final, to good effect. The Wanderers’ defence will also be wary of Roar’s mobile and potent forward set up led by leading marksman Jamie McLaren and supported by Tommy Oar or Brandon Borrello as well as Broich.

For the Wanderers, expect Popovic to once again promote striker Brendan Santalab into the starting line up, a move which paid dividends in the last two matches of the season. Mark Bridges and the elusive Romeo Castelen will likely partner him up front supported also by former Roar player Mitch Nicholls.
If the game opens up, fans can expect to see plenty of chances at both ends in what could be another epic encounter between these two.