Draw is just the ticket for Bayern, Olympiacos 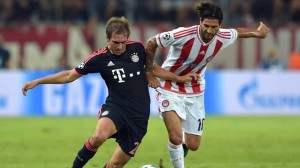 A draw suits both teams when Bayern München host Olympiacos on matchday five – they each have nine points in Group F and one more will send them into the last 16.

FC Bayern München host Olympiacos FC on UEFA Champions League matchday five with both teams knowing a draw will be enough for them to reach the last 16.

• Victory will ensure Bayern, who are unbeaten in their eight games against sides from Greece (W6 D2), win the group.

• Bayern prevailed 3-0 in Piraeus on 16 September, Thomas Müller scoring either side of a Mario Götze effort.

• To wrap up the group, Olympiacos must triumph by a margin that would give them the head-to-head advantage.

Previous meetings
• The teams met in the 1980/81 European Cup first round, the Bundesliga giants winning both legs (4-2 away, 3-0 home). Bayern chief executive Karl-Heinz Rummenigge scored in both games.

Bayern
• The German title holders followed up their result in Greece by scoring five without reply at home to GNK Dinamo Zagreb. They then dropped their first points in a 2-0 reverse at Arsenal FC before beating the same side 5-1 two weeks later.

• Last term, Bayern reached the UEFA Champions League semi-finals for the fourth time in a row, winning all six games – scoring 22 goals – in Munich. Josep Guardiola’s charges beat FC Shakhtar Donetsk 7-0 in the round of 16, FC Porto 6-1 in the quarter-finals and FC Barcelona 3-2 in the semi-final but bowed out having lost 3-0 away.

Olympiacos
• The Greek side, in the group stage for the 17th time, won 3-2 at Arsenal on matchday two – their first victory in England at the 13th attempt.

• They then continued their good form by defeating Dinamo 1-0 at home and 2-1 away to join Bayern on nine points.

• Last season Olympiacos finished third in Group A, losing all three away games. They transferred to the UEFA Europa League and were defeated in the round of 32, succumbing 2-0 to FC Dnipro Dnipropetrovsk ahead of a 2-2 home draw.

• It is the fifth time in 14 seasons that Olympiacos have been drawn in the same UEFA Champions League section as a German club. They have lost on five of their six visits to Bundesliga opponents – their solitary success coming in 2007/08 when they won 3-1 at SV Werder Bremen. It was the only time in those six games that they managed to score.

• Alberto Botía made his Spanish Liga debut under Guardiola in Barcelona’s 1-1 away draw against RC Deportivo La Coruña in 2008/09.

• Robert Lewandowski scored in Borussia Dortmund’s 3-1 loss at Olympiacos in the 2011/12 group stage.

• Lewandowski struck in Poland’s 1-1 draw with Giannis Maniatis’ Greece in the opening match of UEFA EURO 2012 in Warsaw. Kostas Fortounis came off the bench for the last 22 minutes.

• In the same tournament, Philipp Lahm scored Germany’s first in a 4-2 quarter-final elimination of Maniatis’ Greece. Manuel Neuer, Holger Badstuber and Jérôme Boateng all started and Müller and Götze came off the bench.

• David Alaba scored in Austria’s 4-1 win against substitute Jimmy Durmaz’s Sweden in a UEFA EURO 2016 qualifier in Solna on 8 September.

• In the 2009/10 UEFA Champions League, Esteban Cambiasso’s FC Internazionale Milano first beat Guardiola’s Barcelona in the semi-finals and then Bayern in the decider.

Bayern
• Bayern have dropped only two points in the Bundesliga this season. Their record ten-match winning start to the campaign ended when they drew 0-0 at Eintracht Frankfurt on 30 October.

• Javi Martínez’s goal in the 3-1 victory at FC Schalke 04 on Saturday was his first since the UEFA Super Cup against Chelsea FC on 30 August 2013.

• Guardiola’s team have scored five goals in a game on five occasions this term, most recently against Arsenal on 4 November.

• The Bavarians have managed at least four goals in each of their last six home fixtures.

• Douglas Costa scored the opener and made the other two in Brazil’s 3-0 FIFA World Cup qualifying triumph over Peru on 17 November.

• Lewandowski scored twice as Poland defeated Iceland 4-2 on 13 November. Arjen Robben registered a double in the Netherlands’ 3-2 win in Wales.

• Kingsley Coman made his senior France debut against Germany the same evening and also came off the bench during Les Bleus’ 2-0 loss to England four days later.

• Lewandowski has found the net 27 times in 24 outings for club and country this term. Müller has scored 22 in 24.

• Holger Badstuber (out since 21 April, thigh) made his comeback as a substitute in the 4-0 defeat of VfB Stuttgart on 7 November.

• Thiago Alcántara sustained a knee injury during Spain’s 2-0 success against England on 13 November and is expected to be sidelined for three to four weeks.

• Götze was ruled out for ten to 12 weeks after rupturing a tendon in his groin during Germany’s UEFA EURO 2016 qualifying loss to the Republic of Ireland on 8 October.

• Franck Ribéry (11 March, ankle) is yet to play this term, while Juan Bernat (thigh) has been unavailable since late October. Sebastian Rode (late September, thigh) was an unused substitute on Saturday.

Olympiacos
• Cambiasso and Elabdellaoui are a booking away from a ban.

• The derby against Panathinaikos FC on Saturday was abandoned before kick-off because of crowd disturbances.

• Olympiacos are the only team in the Greek Super League with a 100% record having won all ten matches. They are one win away from matching the all-time best for consecutive victories at the beginning of a season, set by the club’s 1966/67 vintage.

• The 3-0 matchday one reverse against Bayern is the Piraeus outfit’s only defeat in their last 23 fixtures in all competitions.

• Botía strained his right hamstring on matchday four and is doubtful for the game in Munich.

• Alejandro Domínguez has not played since suffering a right hamstring injury in a Greek Cup group stage match against Platanias FC on 28 October.

• Felipe Pardo – Olympiacos’s match winner against Dinamo last time out – made his debut for Colombia in their FIFA World Cup qualifying draw with Chile on 12 November.

• Alfred Finnbogason scored in Iceland’s friendly losses to Poland (2-4) and Slovakia (1-3) on 13 and 17 November respectively.