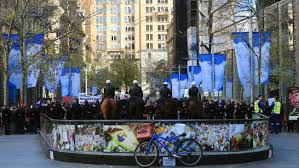 Riot police and officers on horseback clashed with anti-racism protesters trying to march through Sydney in a show of defiance aimed at an anti-Islam gathering 200 metres away.

The rival rallies were held on Sunday at either end of Martin Place in central Sydney and coincided with similar events around the country.

Up to 300 people, some from socialist and anarchist groups, attended the anti-racism gathering, while the anti-Islam rally attracted about 100.

Police – at least 200 officers – were out in force well before either rally began, with the goal of keeping the two opposing protests apart.

When a crowd at the anti-racism end of Martin Place began to surge on to Macquarie Street, riot and mounted police rushed to block them from taking the march to the streets.

“We have the right to demonstrate,” the crowd chanted. “This is not a police state.”

See your ad here
But officers pushed the protesters, among them people carrying small children, back towards the square, the same pedestrian mall where the Lindt cafe siege took place in December last year, and where only one week ago a vigil was held for the victims of the Paris terrorist attacks.

Omar Hassan, one of the organisers of the anti-racism rally, said their message was a peaceful one.

“We’re here to send a strong message against racism following, obviously, the tragedies in Paris,” he said.

“We’re concerned that the far right will try to mobilise legitimate fear and concern in a racist and divisive way. So we’re here to send an anti-racist and inclusive message.”

At their end of Martin Place, the Reclaim Australia rally was told “political correctness” had gone too far.

“We should have the right as Australians to choose if we want a church or a mosque in our towns – and to not want a mosque does not mean that we can automatically be labelled as racists,” she said.

“We should have the right to choose Halal-certified products or not, but these choices are being removed from us. Does that make us racist? No.”

In Melton, a suburb of Melbourne, about 500 people on each side showed up to similar rallies. At that protest – against a mosque proposal – four men were arrested.

In Canberra, the rival groups were separated by physical barriers outside Parliament House and opposing protesters engaged in heated verbal exchanges over the barricades.

In Brisbane, Emma Miller Place, just outside the CBD, was home to duelling rallies on Sunday.

In Perth, a massive police presence broke up potential violent clashes between anti-Islamic extremists and ant-racist groups at Parliament House.