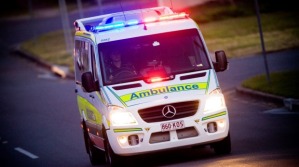 An 18-year-old man remains in a critical condition in Royal Brisbane Hospital’s burns unit after being doused with accelerant and set on fire in a Gold Coast street on Sunday morning.

Police are hunting the perpetrator of the attack, which left the teenager frantically knocking on the doors of residents of Wardoo Street in Southport seeking help.

Queensland Ambulance Service critical care paramedic Grant Gamble said an accelerant had been poured on the boy, prior to him being set alight just after 7.30am on Sunday.

He said residents had acted quickly to cool the boy down before paramedics arrived on scene and he was placed in an induced coma.

“He was in a significant amount of pain, the members of the public did a great job cooling him down initially,” Mr Gamble said.

“We placed him in an induced coma, secured his airway, then took him to the RBH to the burns unit directly.”

A hospital spokeswoman said the man remained in a critical but stable condition in the unit on Sunday afternoon.

Mr Gamble said he suffered burns to about 18 per cent of his body, largely to his face, chest, back and arms.

The attack is not believed to be related to schoolies celebrations, which officially kicked off on the Gold Coast on Saturday.

Police have appealed for public help in finding the teenager’s attacker, urging anyone in Baratta Street, Southport between 7.30am and 7.45am Sunday who drove past the victim’s silver Toyota Camry with New South Wales number plate BM 52 VZ to urgently contact CrimeStoppers.

Mr Gamble said the rapidity with which the flames took hold on the victim made it almost certain an accelerant was used prior to him being torched.

“It appears for those burns to occur and rapidly, I would speculate and accelerant was used (but) what accelerant I can’t say exactly,” he said.

An 18-year-old man is fighting for life after being doused in petrol and set alight on a Gold Coast street early Sunday morning.

A Queensland Ambulance Service spokesman said the teenager was rushed to the Royal Brisbane and Women’s Hospital’s burns unit in a critical condition, after being set alight in Wardoo Street in Southport just after 7.30am.

He said the victim suffered burns to 18 per cent of his body, mainly to his face, chest and arms.

Police are now hunting his attacker and have appealed for anyone who witnessed the incident to come forward.

They have urged anyone who travelled past the victim’s silver Toyota Camry with New South Wales number plate BM 52 VZ on Baratta Street, Southport before 7:45am to call CrimeStoppers.

The QAS spokesman said the incident was not believed to be schoolies related.
source:brisbanetimes.com.au