World-acclaimed barrister teams up with Foundation for Hellenic Studies 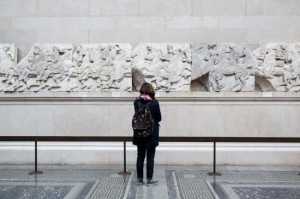 As part of the 100-day exhibition ‘The Sculptures of The Acropolis – A Retrospective’, the Sydney-born human rights barrister, academic, author and broadcaster, Geoffrey Ronald Robertson QC, will be arriving in Adelaide on 6 May to attend a formal dinner hosted by not-for-profit organisation The Foundation for Hellenic Studies.

The well-respected barrister is a founder and joint head of Doughty Street Chambers and, together with British-Lebanese lawyer, activist, and author Amal Alamouddin Clooney, visited Greece in October 2013 to meet with former Greek Prime Minister Antonis Samaras and his cabinet in an attempt to resolve the ongoing issue and reclaim the Parthenon Sculptures.

Sixty-nine-year-old Robertson, who holds dual Australian and British citizenship, will attend the event as an honorary guest, During the evening, he will have the opportunity to talk about his involvement and experience during his engagement, in the presence of dignitaries such as the Treasurer of South Australia Tom Koutsantonis, the Consul General of Greece in South Australia, Andreas Konstantinos Gouras, Chief Justice of the Supreme Court of South Australia Chris Kourakis and a number of distinguished interstate guests.

The sculptures, which include 75 metres of friezes depicting mythological scenes and 17 statues, were removed from the ruins on the Acropolis by British ambassador Thomas Bruce, the seventh Earl of Elgin, in the early 19th century.

“There is considerable support for the emergence of an international rule requiring the return of cultural treasures of great national significance,” Robertson wrote in his 2012 book Crimes Against Humanity, attempting to explain his theory of an international right to the return of cultural property.
“Such a rule would not result in the emptying of western museums; it would only apply to ‘unique’ works such as the marbles – a living symbol of history and culture from the time of the birth of democracy. It would be based on international treaties and conventions that grant countries a ‘right to culture’,” he concluded.

The Foundation for Hellenic Studies launched the #ReturnTheMarbles campaign back in 2013 and has since accumulated thousands of supporters from all over the world. The overwhelming response across the globe spurred the approach to the Greek government, and The Foundation secured a first-time exhibition in Australia with the support of the South Australian government.

The life-size replicas, which include Poseidon’s bust, a two-metre-tall caryatid and examples of elements from the Parthenon’s frieze and metopes, were presented in an official opening on 31 March.

The exhibition will remain ‘in residence’ at the Adelaide Festival Centre for a period of 100 days, so that visitors can view the majestic forms of ancient Greece, that were used to symbolise democracy, equality and community.