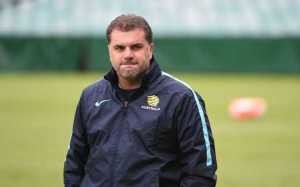 Postecoglou says ‘we’re prepared for what’s thrown at us’

The final qualifying phase of the Socceroos’ long and winding road to the 2018 World Cup finals in Russia is now set out before them. It kicks off at home on 1 September against Iraq and ends at home 12 months later against Thailand, taking in 10 matches along the way, including matches against UAE, Saudi Arabia and Japan.

The Socceroos will cover the length of Asia from the Middle East to the Far East to South East Asia in its quest to qualify for its fourth consecutive World Cup finals. Tuesday evening’s draw in Kuala Lumpur divided the 12 remaining countries into two groups of six. Each country will play all other countries in their group twice over the course of 12 months.

“It’s good to know the draw so we have a clear picture of what is in front of us from a football and logistics perspective to qualify for the World Cup. Over the last two years we have built up a very strong portfolio of information on most Asian nations and its players by having scouts at matches and tournaments all over Asia, so the players go into every match well prepared. That information will be sharpened and expanded now we know that we face Japan, Iraq, UAE, Saudi Arabia and Thailand.
“As champions of Asia we will show due respect to all countries but are focused on continuing our journey that has aspirations greater than simply qualifying for the World Cup.”

Postecoglou agreed that the draw had placed Australia in the tougher of the two groups, but added that his team is prepared for whatever is thrown at it.

Australia and Japan are favourites to qualify from Group B but they face strong challenges from both Saudi Arabia and UAE. The schedule is also likely to test Australia, with eight of the ten matches occurring in four pairs so that Australia plays the first of a pair of matches at home, and then has to fly to another country and time zone to play a second match away just five days later, or vice versa.

Coach Postecoglou has stressed the importance of stadium selection and playing surface preparation to optimise Australia’s chances of success in their home fixtures. The home venues have yet to be decided, but the coach said any state government who requested a home game needed to provide their biggest and best playing surface. He added it was no longer acceptable to come home to a torn-up playing surface even during winter months.

“If state governments want us it’s up to them to make a pitch for us and we aren’t fixed to one place or another. We want the best possible place and best possible venues. The Saudi Arabian crowd will be hostile and we’ll face a similar scenario in Japan. I reckon the Thais will pack out their stadium for us as well. Hopefully our guys will feel invincible at home,” Postecoglou told The Sydney Morning Herald.

The top two countries from each group qualify automatically for the World Cup finals, while the two teams finishing third in each group will then enter into play-offs for the chance to qualify.