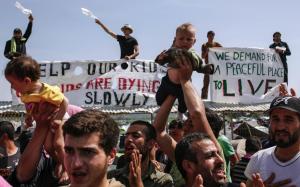 While government authorities were trying to convince migrants and refugees stranded at Piraeus port to move to other shelters around the country Wednesday, harbor officials there lashed out at volunteers for allegedly encouraging refugees to demand the opening of European Union borders, despite last month’s deal between Brussels and Ankara to deport migrants back to Turkey.

In a statement issued Wednesday, the Piraeus Port Authority alleged that there are people there “that are obstructing the plan to transfer refugees and migrants to organized shelters” and urged judicial authorities to intervene so the law is upheld.

“The time has arrived for the law to be strictly enforced against those who are taking advantage of the desperation and vulnerability of refugees and migrants,” the statement said. Rights groups have slammed the EU agreement with Ankara as a contravention of international law. Amnesty International has also lambasted the deal, saying that Turkey is not a safe country for refugees.

According to the latest official figures, there are 4,720 refugees and migrants – most of them families – stranded in deplorable conditions at Piraeus port.

The government’s migration spokesman, Giorgos Kyritsis, Wednesday reiterated that the aim is to evacuate the migrants from the port to other shelters by Easter Sunday.

However, according to some reports, the government has allegedly not done enough to inform refugees and volunteers on how the former’s transfer will be implemented, making a bad situation even worse.

“I came here to help. Someone must guide me. I can’t just ask the refugees what they need,” one female volunteer from Spain told Kathimerini.

Meanwhile, further deportations of refugees under the EU deal may be delayed by up to two weeks until the required infrastructure is in place, according to Alternate Foreign Minister for European Affairs Nikos Xydakis, to deal with the growing number of migrants applying for asylum.

Xydakis admitted Wednesday that few migrants will return to Turkey over the next couple of weeks following the initial deportation of 202 on Monday.

“We knew there would be a lag, an intermediate period before the program takes off, of at least two weeks to get through the first batch of applications,” he said, adding that some deportations may take place Friday.

He also said that Greece still does not have enough personnel on the ground to process the increased volume of asylum applications. He added that despite the hundreds of security experts provided by EU border agency Frontex, only some 20 EU legal experts have arrived in Greece so far.

“This is the weakness of the whole procedure. It is easier to deploy police officers than experts in refugee law, interpreters, debriefers, but they are coming” he said.

According to the latest statistics, migrant flows into Greece saw a sharp decline yesterday as no arrivals were recorded on the islands of the northern Aegean (Lesvos, Chios and Samos) for the first time in months.