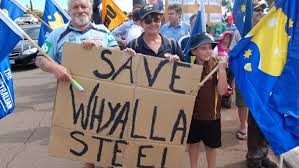 RALLY CRY: About 500 people hit the streets of Whyalla on Tuesday in support of the town’s embattled steelworks, which in turn feeds the OneSteel rolling mills in Newcastle. Picture: Louis Mayfield, Whyalla News.

WHYALLA steelworks might the public face of embattled iron and steel company Arrium but it has at least 1200 Hunter employees facing an uncertain future after the company and more than 70 of its subsidiaries went into voluntary administration on Thursday morning.

Financial administrators Grant Thornton took control of the company after its board and its bankers could not agree on a solution for the $4 billion in debts that the company accumulated – much of it in building up an iron ore business that became a big loss-maker in the wake of plummeting commodity prices.

As well as its South Australian businesses, Arrium owns and operates a range of steel assets in and around Newcastle, which between them still employ more than 1200 people, even after years of steady workforce reductions.

Arrium assets include the OneSteel still mills at Mayfield, employing an estimated 700 people, and the Comsteel and Moly-Cop businesses at Waratah, with a workforce of about 500.

The administrators said the Moly-Cop business had not been put into administration “and should be largely unaffected”.

But it was unclear how this would play out in Newcastle, given the shared work site with Comsteel, which is one of the companies in administration. Arrium also owns a metal recycling plant at Hexham, a steel reinforcing business at Bennetts Green and a Metalcentre retail outlet at Cardiff. The administrators said it would be “business as usual” for the time being at the affected businesses.

Arrium’s financial woes have been well-known for a long time, but the situation escalated this week when the company’s 35-bank lending syndicate rejected a $1.2 billion rescue package proposed by the company and a US “vulture fund” specialising in lending to distressed companies.

On Thursday morning, Arrium said four representatives of international insolvency specialist firm Grant Thornton had been appointed to act as voluntary administrators for each of the “relevant companies” in the Arrium group.

“As previously announced, Arrium has been in discussions with its lenders (banks and noteholders) following the lenders’ rejection of the recapitalisation plan . . . involving GSO Capital Partners LP (on behalf of funds managed by it and its affiliates) that was announced on 22 February 2016,” Arrium said.
“These discussions have now ceased. After considering the available alternatives, in the current circumstances it has become clear to the board of Arrium that it has, unfortunately, been left with no option other than to place the relevant companies into voluntary administration in order to protect the interests of stakeholders.”

The statement included a list of the 74 companies affected, including various OneSteel entities and Comsteel Pty Limited.

Arrium made no mention of Moly-Cop – which makes grinding balls for the mining industry – in its stock exchange announcement but Grant Thornton said “the Australian and global Moly-Cop business is not affected by the appointment”.

Arrium had tried unsuccessfully to sell Moly-Cop late last year, and Grant Thornton was working on “an appropriate strategy” for that business globally.

As well as the $2.8 billion owed to banks, Arrium reportedly owes $1 billion to its trade creditors and has obligations to its employees totalling $500 million, as well as responsibility for various environmental clean-ups, led by the Whyalla steel plant.

Arrium began life as OneSteel in 2000 as part of BHP’s push to get out of the steel industry. Its push into iron ore was originally applauded by analysts and investors, but when the commodities boom ended, the cost of the company’s rapid expansion was apparent.

Analysts say Arrium has a number of good businesses and while the Newcastle rolling mills are fed entirely from Whyalla, they could obtain steel from Arrium’s Sydney electric arc steel-making furnace if Whyalla was to shut.

Grant Thornton promised “a thorough and impartial investigation” of Arrium’s problems. A first creditors’ meeting would be held within eight business days. Arrium shares are suspended from trade at 2.2 cents, down from their 2008 peak of $5.91.

RALLY CRY: About 500 people hit the streets of Whyalla on Tuesday in support of the town’s embattled steelworks, which in turn feeds the OneSteel rolling mills in Newcastle. Picture: Louis Mayfield, Whyalla News.