The IMF plot to usher Greece towards bankruptcy 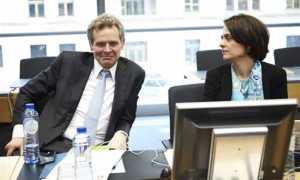 Poul Thomsen, the head of the IMF’s European Department, and Delia Velkouleskou, the IMF Mission Chief for Greece, were intercepted while plotting to create a credit event for Greece to happen in June.

Wikileaks publishes a transcript of private discussions between senior IMF officials, in which default is presented as leverage in debt relief talks

A plan to further destabilise the already frail Greek economy, paving the country’s way to default, was revealed on Saturday, when WikiLeaks published the transcript of an intercepted teleconference between the top two International Monetary Fund officials in charge of managing the Greek debt crisis.

In what reads as a page torn from the script of “House of Cards”, Poul Thomsen, head of the IMF’s European Department and Delia Velculescu, the IMF Mission Chief for Greece discuss a potential Greek default in June, co-inciding with the United Kingdom’s referendum on leaving the European Union, that could be used as leverage not only to persuade Greece to proceed with the long-overdue reforms and further implement austerity measures, but also to persuade Germany and the European Union to concede to a debt relief for Greece.

Debt relief has been a cause of strife among the members of the Troika (composed of the IMF, European Commission and the European Central Bank). Last August, the IMF had threatened to withdraw from participating in the €86 billion Greek bailout, which was covered by EU member states. IMF Chief Christine Lagarde stated at the time that the IMF’s future participation was contingent on Greece receiving “significant debt relief” from creditors, not only to help the economy, but also because the Greek government is politically constrained in carrying out all the austerity needed to begin improving its tattered finances. On their part, the uropean members of the Troika – specifically Germany – refused to discuss this option.

In his presentation of the leaked discussion, Julian Assange, the founder of WikiLeaks, who is stranded in the Embassy of Ecuador in London, states that for the IMF to remain in the Troika “seems an increasingly hard sell internally for the IMF, because non-European IMF creditor countries view the IMF’s position on Greece as a violation of its policies elsewhere of not making loans to countries with unsustainable debts”. An I.M.F. exit would put the bailout in jeopardy and raise the risk of a Greek default in July, when Athens must repay a large loan. The I.M.F. has leverage in pressing Germany to agree, given that the German Parliament might not agree to release funds to Greece unless the I.M.F. participates in the program. But Wolfgang Schäuble, Germany’s finance minister, sees “no argument” for acceding to the I.M.F.’s demands.

The intercepted discussion highlights the way the IMF is trying to surpass this dead end; in the transcripts, the two officials argue that the threat of an imminent financial catastrophe is needed to force the other players into a “decision point”. For Germany, on debt relief, and In the case of Greece, to accept the IMF’s austerity “measures,” — including raising taxes and cutting Greek pensions and working conditions. “However, the UK “Brexit” referendum on 23 June will
paralyse European decision making at the critical moment”, estimates Assange. One of the tactics used by the IMF is stalling; Thomsen and Velculescu are heard strategising whether to suppress the IMF’s next report on whether Greek debt is sustainable, thus delaying the next stage of the bailout.

“In the past there has been only one time when the decision has been made and then that was when [the Greeks] were about to run out of money seriously and to default”, says Thomsen in the leaked document, continuing: “And possibly this is what is going to happen again. In that case, it drags on until July, and clearly the
Europeans are not going to have any discussions for a month before the Brexits…” That could pose problems for whether Greece receives financial aid from the bailout in time to meet its July debt repayments.

The IMF official is also stating a hypothetic approach towards German Chancellor, Angela Merkel, presenting her with an arm-twisting dilemma: “you have to think about what is more costly, to go ahead without the IMF […], or [to] pick the debt relief that we think that Greece needs in order to keep us on board?”

Apart from the question of debt relief, another point of frustration, between the IMF and the uropean creditors, is in regard to the Greek Primary Government Budget Surplus target. The European Comission has set a goal of a surplus of 3.5% of GDP, while the IMF has been campaigning for a – more viable – goal of 1,5%. As Thomsen puts it, “if [Greece] come around to give us 2.5% [of GDP in tax hikes and pension-wage-benefits cuts]… we should be fully behind them.” — meaning that the IMF would, in exchange for this fresh austerity package, support the reduction of the Primary Surplus Target imposed upon them from the 3.5% that the European Commission insists on to 1.5%.

The discussion also implies that the IMF has found itsefl in a weakend position; Velculescu argues that “if [the Greek government] get pressured enough, they would… But they don’t have any incentive and they know that the Commission is willing to compromise, so that is the problem. […] We went into this negotiation with the wrong strategy, because we negotiated with the Commission a minimal position and we cannot go further [whereas] the Commission is just starting from this one and is willing to go much further. So, that is the problem. We didn’t negotiate with the Commission and then put to the Greeks something much worse, we put to the Greeks the minimum that we were willing to consider and now the Greeks are saying [that] we are not negotiating.”

The WikiLeaks revelation was met with outrage by the Greek government; after an emergency session on Saturday to discuss the mplications, the government spokesperson issued a statement, asking the IMF for  explenations “whether pursuing the creation of bankruptcy conditions in Greece, just before the British referendum, is the fund’s official position”. Alexis Tsipras himself addressed a letter to Christine Lagarde, expressing his concerns. The I.M.F. declined to comment on the WikiLeaks transcript and the accusations that it is trying to “politically destabilize Europe.”

The publication of the discussion has stirred debate in Greece; Critics of the Tsipras administration claim that the government itself leaked the transcript and is trying to gain momentum, in order to justify delays on reforms. Tsipras supporters see it as a vindication of last year’s negotiations. Most analysts and observers, both inside Greece and outside, are shocked with the cynicism. “It is the whole of Europe that the IMF is conspiring to hit with the shock doctrine”, writes Paul Mason, a journalist who covered last year’s negotiations for British media outlets, stating that it is the European Commission and the European Central Bank that are holding the €300bn of Greek debt. According to the New York Times, the leak “exposed the fraught behind-the-scenes political machinations that have led to a deadlock on how to deal with a country still regarded as Europe’s weakest link”.

The overall feeling is one of fury and incredulity. The idea that the IMF is planning to inflict  a “credit event” that will force Greece to the edge of bankruptcy, is troubling, especially given that Greece is a nation holding tens of thousands of refugees and tasked with a highly complex international border policing mission. Poul Thomsen said in the intercepted discussion that he had expected the refugee crisis in Greece to have pushed creditors to reach an agreement on debt relief quickly. After all, the country has become Europe’s holding pen for more than 50,000 migrants since European countries shut their borders, preventing asylum seekers from reaching their preferred destination of Germany. Greece has been struggling to cope with a deteriorating situation, including riots in refugee camps and the beginning of a European Union program requiring the mass deportation of refugees from Greek islands starting on Monday.