Lagarde to Tsipras: the IMF is not pushing Greece to default 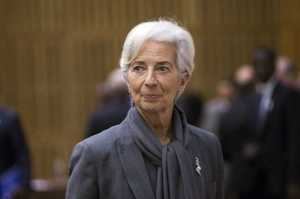 In a dry letter to the Greek Prime minister, the director of the International Monetary Fund dismisses the content of the WikiLeaks transcript as “nonsense”.

Relationships between Greece and the International Monetary Fund are strained, casting a shadow on the talks currently taking place in Athens between the Greek Finance Ministry and the EU/IMF lenders regardeng Greece’s fiscal and reform progress,  aiming to conclude a bailout review that will unlock further loans and pave the way for negotiations on long-desired debt restructuring. The review has been stalling since January due to disagreement among the lenders over the estimated size of Greece’s fiscal gap by 2018; another cause of delay is the Greek stance on pension reforms and the management of bad loans.

Negotiations resumed on Monday at the Hilton hotel, just two days after a WikiLeaks publication of key IMF officials discussing the stalled talks. In the document, Poul Thomsen, head of the IMF’s European Department and Delia Velculescu, the IMF Mission Chief for Greece discuss a potential Greek default in June, co-inciding with the United Kingdom’s referendum on leaving the European Union, that could be used as leverage not only to persuade Greece to proceed with the long-overdue reforms and further implement austerity measures, but also to persuade Germany and the European Union to concede to a debt relief for Greece.

The revelation was met with a combination of fury and incredulity in Greece. The Greek government reacted swiftly, with the Greek PM, Alexis Tsipras, sending a letter to the IMF head, expressing his concerns and asking “whether [Thomsen and Velculescu’s] position reflects the official IMF view”, as well as wether “Greece can trust, and continue negotiating in good faith with, IMF officials who express views such as those expressed in these publications”.

Christine Lagarde responded with a carefully worded letter, in which she dismisses “any speculation that IMF staff would consider using a credit event as a negotiating tactic” as ” simply nonsense”, although she does not deny the authenticity of the leaked discussion. The Fund’s Managing director went on to offer her support to the IMF officials handling the Greek bailout program, stating that “For them to be able to do their work, […] it is critical that your authorities ensure an environment that respects the privacy of their internal discussions and take all necessary steps to guarantee their personal safety”. This phrase is believed to be a thinly veiled accusation towards the Greek goverment as being the source of the leak. Furthermore, in a symbolic gesture, Christine Lagarde released the letter on the IMF website, as a means to underline that ” the IMF conducts its negotiations in good faith, not by way of threats, and we do not communicate through leaks”.

As for the current state of negociations Christine Lagarde, in her letter, wrote: “we are still a good distance away from having a coherent program that I can present to our Executive Board. I have on many occasions stressed that we can only support a program that is credible and based on realistic assumptions, and that delivers on its objective of setting Greece on a path of robust growth while gradually restoring debt sustainability”. In this aspect,  she repeated her view that “if it were necessary to lower the fiscal targets to have a realistic chance of them being fully met, there would be an attendant need for more debt relief”.

The European institutions that are taking part in the bailout have been reluctant to discuss debt relief, mainly due to Germany, which is very eager to keep the IMF in the Greek program, mainly for internal political reasons, but it is adamant that a debt haircut is out of the question. Asked to comment on the leaked discussion between the IMF officials. concerning the progress of the evaluation of third Greek bailout deal, a spokesperson of the German Finance Minister, Wolfgang Schäuble, stated: “For us, these talks don΄t exist”. German Chancellor Angela Merkel is due to meet Lagarde in Berlin today, and the leaked discussion is expected to overshadow any other issue in their agenda.

Meanwhile, in Athens, the Greek goverment is trying to press for the lenders to wrap up the review by the time of the next Eurogroup on April 22. The next set of talks are due to take place on Wednesday but in the meantime the Greek side is expected to provide its proposals for the 1% of GDP in measures that it believes can close the fiscal gap by 2018, as well as pension reform, the sale of nonperforming loans and the creation of a new fund for the privatisations of Greek assets. The Troika representatives are due to leave Greece on April 12 for the IMF’s Spring Meetings in Washington.

“The strategy of stalling negotiations, in order to create the circumstances of a credit event in Greece, just before the UK referendum is, indeed, nonsense”, stated Alexis Tsipras, after a meeting on the process of negotiations, responding to Christine Lagarde’s letter. “It is the kind of nonsense that we all have a duty to avert”, he added.