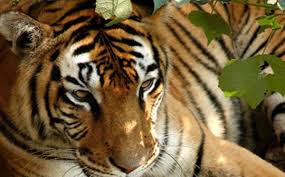 Please upgrade your Flash Plugin A Sumatran tiger was ‘hot and bothered’ when it swatted an Australia Zoo animal keeper, leaving him hospitalised with puncture wounds.

That’s the diagnosis of owner Terri Irwin, who tweeted shortly after the male handler was attacked by Ranu, a 12-year-old tiger at the Beerwah zoo.’Hot day. One of our tigers got hot and bothered and scratched a keeper,’ she wrote.’Keeper is ok, tiger is ok.’The 35-year-old was attacked as he led the animal through a daily ‘enrichment routine’ through bushland at the zoo.

The male tiger became interested in its surrounds but when prompted to change direction by the handler, took a swipe.

The result was two deep puncture wounds to the man’s wrist and forehead, with paramedics rushing to the wildlife park at about 11am (AEST) to treat him.

They transported the man to the Nambour Hospital in a stable condition.He was discharged on Thursday afternoon and is expected to return to work in coming days.

Workplace Health and Safety inspectors attended the zoo after reports of the attack to investigate.