One of the first Greeks to make good in Hollywood 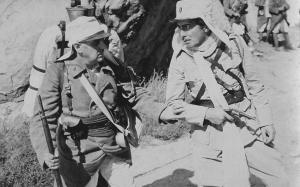 Thanasis Lyberis during shooting with fellow actor George Rigas while making a film about the Foreign Legion. Lyberis set out at the start of the 1900s from Vasilitsi, a very poor village in the southern part of Messinia in the Peloponnese, and went through hell and high water to reach America.

What does the phrase “Hollywood Greeks” bring to mind? For most, it’s probably Greek-American film stars such as Olympia Dukakis or Zach Galifianakis or directors such as Alexander Payne.

That’s today. About a century ago, however, when Greeks left for America simply in hopes of making a living, things were much different. Usually farmers or fortune hunters, the emigrants of the early 20th century ended up doing all sorts of odd jobs and some of them managed to make it into the then-newly established capital of the film industry. Today, poet, writer and researcher Fontas Landis is ready to present the untold tale of the Greeks in the exciting early days of Hollywood using photographs from the archive of one of those pioneers.

Thanasis Lyberis set out at the start of the 1900s from Vasilitsi, a very poor village in the southern part of Messinia in the Peloponnese, and went through hell and high water to reach America. There, like thousands of other Greeks, he went from job to job, struggling to make a living. Eventually, however, he managed not just to survive, but also to amass the experience of three or four lifetimes. His glory days were undoubtedly those he spent working in Hollywood.

Starting out as a stunt man and extra, the intrepid Greek played roles – including female parts – in dozens of films, working with some of the greats of the time, such as Douglas Fairbanks, Mary Pickford, Rudolph Valentino, Charlie Chaplin, John Gilbert, Ramon Novarro and many, many more. Lyberis also got the opportunity to rub shoulders with other prominent figures of the time, among them Albert Einstein, William Saroyan, Bernard Shaw and Walt Disney.

The photographic archive Lyberis compiled, in combination with Landis’s recordings of conversations with him shortly before his death, are significant not just because of these personages but also because they give us images of and information about other Greeks who were working in Hollywood at the time and whose names have been more or less forgotten today. William Nickle (Nikolopoulos) from Aigio, Giorgos Stamatopoulos, or George Stam, from Galaxidi, and Giorgos Koundouros from Crete were all friends of Lyberis.

Their signed photographs are moving because they bring to life the people of a heroic age, people who struggled, together with so many others, to achieve the American dream.

Landis is working with the nonprofit organization Mnimes (Memories), which manages the archive, to publish as much of the material as possible. This effort will start with the publication of a coffee-table book in 2016 on the Greeks of Hollywood. There are also efforts under way to create a small museum to display the material, which were initiated by Landis during a recent trip to Los Angeles, where he mobilized a number of Greeks to form a committee headed by the director of the Hellenic Library of Southern California, Philip Trevezas.

The final project in this ambitious campaign to showcase Greek talent on and behind the silver screen is a documentary in which director Costas Vakas will follow in Lyberis’s footsteps from the small Peloponnesian village to Tinseltown.

“Almost all of these Greeks are practically unknown – in America at least, nobody knows who they are. Their portraits and the photographs from the films in which they acted are alone important testimonials that show, if nothing else, that these people existed,” says Landis.

The researcher hopes that the book will encourage more research into this fascinating chapter of the Greek diaspora. It would be an interesting challenge, for example, for someone to try locate the films they appeared in, even though it appears unlikely given that old film was often destroyed due to fire risk and the lack of storage space.