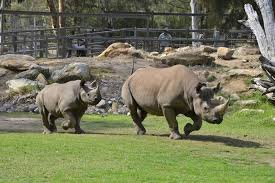 IT was a special day for black rhino Dafari on Wednesday, with the calf celebrating his first birthday at Taronga Western Plains Zoo.

Dafari is the second calf to mother Bakhita, and the 12th black rhino to be born at the zoo.

Rhino keeper Nerida Taylor said a special cake was made for Dafari, on what she called a “great occasion”.

“It’s part of the hay ration and we put some bottle brush flowers in it to act as candles,” she said.

“He was a bit playful when he first came out and it was great to see him enjoying it.”

“He was weighed probably a month ago and I think he was just under 500 kilograms so easily now he’d be well and truly over the 500 kilogram mark,” Ms Taylor said.

“As we have been watching him grow I think we estimated at early stages he was putting on at least 10 kilos a week.”

Rajah was the first of his kind to be born in Australia and his birth was the result of more than 15 years of planning.

NSW Environmental Minister Mark Speakman said it was an outstanding achievement to have two healthy calves progressing well at the zoo.

He said the zoo was now operating successful breeding programs for three of the five surviving rhino species.