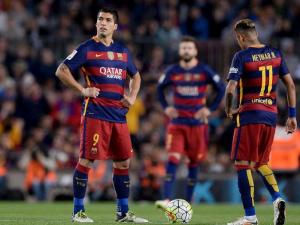 BEFORE El Clasico less than three weeks ago, Barcelona were ten points ahead of Real Madrid.

Manager Luis Enrique said if they won the match then Madrid were out of the title race. Zinedine Zidane had already conceded La Liga title defeat and Atleti’s Diego Simeone said of Barca, “these guys don’t make mistakes.”

But that’s precisely what happened – and not just once.

It ended the Catalan giants’ record 39-match unbeaten run, but the worst was yet to come.

A 1-0 defeat at Real Sociedad was compounded by Champions League elimination at the hands of Atletico Madrid before the treble was completed when Valencia inflicted a 2-1 loss. It’s the first time in 13 years that Barcelona has lost three matches straight. The last time it happened was under Louis van Gaal in his second spell at the club.

While Madrid-based news outlets Marca and AS printed headlines ‘Going under – La Liga burns like never before!’ and ‘Hunted!’, Barca-based paper Sport had a simple message: ‘Get up’.You can bet the champions of Europe will try their very best to.

“We’ve used up all our credit but win five games and we win the league,” said Luis Enrqiue.

“It’s a wonderful challenge and one we happily accept.”

But something’s going to have to change.

So if the Barca boss is planning on winning La Liga, he’d better take note of what’s gone wrong.

When things start to go south, inevitably the manager takes on some of the blame.

“As the manager I’m ultimately responsible so it’s on me. 100 per cent.”

And it’s true, many of the manager’s decisions directly impact results.

Against Valencia, Enrique didn’t make one substitute. Even though tired legs and wayward passes frequented Barca’s play as the match wore on, the gaffer made no changes.

His excuse: “I didn’t make any changes because it would have been unjust to the 11 on the field. They were all at a very high level.”

They’ve seen 16,058 minutes of competitive football between them in the last year. That’s 57 per cent more than Real Madrid’s front men and 63 per cent more than Atleti’s. Suarez has also played every minute of the 30 La Liga games and nine Champions League games.

Incredibly, there’s only been four substitutions among MSN this season and all three played the full 90 minutes in the Valencia clash. And don’t forget about Barca travelling to Japan for the Club World Cup in December and MSN’s international football in South America.

It’s all taking a toll.

Before Valencia, MSN had scored three goals in the previous 30 days. That’s a heavy contrast to the previous three 30-day periods where they hit 19, 24 and 16 goals respectively.

Suarez has been missing chances that he never did before while Neymar has not been able to continue his earth-shattering form from the first half of the season.

Ed Malyon wrote in the Mirror that “Luis Enrique’s commitment to running the trio into the ground could prove costly”.

But there’s a reason that he’s continually playing the front three.

Every squad has to deal with fatigue and tiredness, but Barcelona’s problems have been exacerbated by their surprising lack of depth.

When Messi was injured for a period of the season, reserve forwards Munir El Haddadi and Sandro Ramirez did their best to fill the void. But between them all they could muster in 16 La Liga and European appearances was three goals. Not quite the same result that the Argentinian maestro might yield.

It’s now evident that having Pedro or Alexis Sanchez on the bench would’ve benefited Barca at this point, but with the money spent on MSN – and their transfer ban – there simply wasn’t the funds to keep another top class striker.

And when you look past their starting defence of Javier Mascherano and Gerard Pique, you’re left with Thomas Vermaelen and Jérémy Mathieu – who aren’t used regularly.

They also brought in Arda Turan and Aleix Vidal, knowing neither could register to play until the New Year due to that FIFA ban, but Turan has had his inability to play in the midfield exposed while Vidal is now a third-choice right-back.

“What Luis Enrique needs, and what many managers need, is the first choice XI and maybe six or seven more players that he trusts,” said Gibson.

“They need a 30, 31-year-old quality striker that will be happy to be back up to one of Messi, Suarez and Neymar. Like a younger version of David Villa.

“In the last couple of games when they’ve been chasing goals, Pique has been going up front for the final five minutes.”

The Brazilian exploded in the first-half of the campaign but his impact has lessened as the season has worn on.

Indeed, there have been concerns about his attitude in recent games, as frustration has seen him slap an opponent and berate Jordi Alba for not passing to him.

Spanish football expert Guillem Balague wrote on Sky Sports that he dribbles when he should pass, confronts opposition players unnecessarily, and responds to tackles in the wrong manner.

It’s all changed the effect of MSN and heavily influenced Barca’s results.

Neymar scored 18 goals in September, October and November, while February, March and April have seen him strike just six times.

If the team is going to win La Liga, he’ll need to bounce back.

Barca had 69 per cent possession and 22 shots against Valencia but couldn’t find an equaliser.

Pique opened the scoring in El Clasico in early April, but he had a golden chance to salvage Barcelona a draw against Valencia when he missed from point-blank in the 89th minute.

Earlier in the match Ivan Rakitic unluckily scored an own goal, and despite his team’s dominance, they weren’t able to claw back against Gary Neville’s former team.

Piqué said: “I would almost rather lose playing like that than win playing the way we have recently.”

With five league matches left the panic has set in. Even supposedly the perfect team can get stressed.

“We can assess the fixture list now and I wouldn’t be surprised to see Atletico Madrid and Real Madrid win all their games,” said Gibson.

“I think Barcelona’s biggest opponents are themselves at the moment.

“If they don’t, I think they’ve blown it, it’s that cut and dried for me. Nobody expected it, one point from the last 12, it is remarkable how it has turned around. The panic has set in.”

So now, as Pique cynically quipped: “people wanted an equal league; well, you’ve got it.”