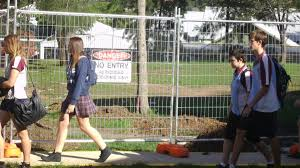 THE Hunter’s schools are suffering under the weight of a $70 million maintenance backlog, part of a statewide school funding black hole.

Figures from the Department of Education reveal that more than a dozen high schools in the Hunter have a maintenance backlog of more than $1 million.

That’s despite the school being touted as a leader in high-tech education after the government committed to spending almost $20 million on a major construction project including state-of-the-art classrooms, administration buildings and outdoor areas.

The damning numbers were released to the state Labor opposition after a freedom of information request, and are accurate to June 2015.

“At a place like Rutherford, which has had a substantial amount of money spent on new buildings, this indicates a situation where you’ve got some students in brand new buildings and some in buildings that are falling down,” she said.

“This can represent anything from leaking roofs to broken windows, and the thing is you know with leaving maintenance work is that it gets worse the longer it’s left.”

The government has sought to blame Labor for the backlog, but Ms Aitchison said the government should “take responsibility”.

“They’ve been in government for five years,” she said,

The government’s parliamentary Secretary for the Hunter Scot MacDonald said that since being elected in 2011 the O’Farrell and Baird governments have committed almost $4 billion to school infrastructure and maintenance, with over $342 million allocated in 2015-16 for school maintenance.