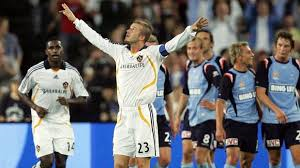 David Beckham in Australia: His first appearance was during the Hyundai Club Challenge match between Sydney FC and LA Galaxy at Telstra Stadium Sydney in 2007. Photo: Robert Gray

One of the most recognisable names in world sport is set to play in Australia later this year with David Beckham leading an all-star cast for a football legends match in Sydney.

After failed bids to lure Beckham to the A-League three years ago and fans of the icon having to wait six years to see him, the former Manchester United, LA Galaxy and AC Milan star is set to finally play in Australia. Fairfax Media understands a deal for the former England captain to play in an exhibition match between former stars of Manchester United and Juventus is close to being sealed.

Beckham will be one of many high-profile former players to take part in the game between two of the most recognisable names in world football. It will be the first time since a friendly between LA Galaxy and Newcastle Jets in 2010 that Beckham has played in Australia. His first appearance – a friendly against Sydney FC in 2007 – attracted more than 80,000.

Beckham is set to play for Manchester United in the fixture in October or November and could be joined by Dwight Yorke, Phil Neville, Ole Gunnar Solskjaer and Ryan Giggs and coached by Sir Alex Ferguson.

It’s understood one of Juventus’ greatest players, Alessandro Del Piero, will not take part in the Sydney game. Despite spending 19 years with the Bianconeri before moving to Australia to play two seasons with Sydney FC, Del Piero won’t play in a game that could hold some significance for him.

The former Juventus captain has not played in any of Juventus’ recent legends games since effectively retiring after leaving Indian Premier League club, Delhi Dynamos, in 2014. He famously played against Juventus when captaining the A-League All Stars in 2014.

French international David Trezeguet will almost certainly take part in the match as president of the Juventus’ Legends program. The Argentine-born French international was on the cusp of signing a guest player deal with Victorian Premier League club Hume City for their FFA Cup semi-final against Melbourne Victory last year.

Despite being contested between players some years past their prime, the legends concept proved popular among football fans in Australia as more than 40,000 attended a match between former Liverpool players and past Socceroos internationals at ANZ Stadium last year.

Anfield greats Steven Gerrard, Ian Rush, Luis Garcia and John Arne-Riise proved impressive drawcards for that match. It’s likely an even greater crowd will flock to Olympic Park for a contest between former players of two of the most supported clubs in world football who dominated Europe and their respective leagues in the late 1990s and early 2000s.