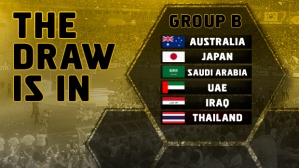 The Socceroos will renew its rivalry with Japan in the final round of 2018 FIFA World Cup Qualifying after the draw was conducted by the Asian Football Confederation (AFC) tonight in Kuala Lumpur.

The Socceroos will renew its rivalry with Japan in the final round of 2018 FIFA World Cup Qualifying after the draw was conducted by the Asian Football Confederation (AFC) tonight in Kuala Lumpur.

The Socceroos will face Iraq, United Arab Emirates (UAE), Saudi Arabia, Thailand and Japan in the 10-match home-and-away series with a place amongst the world’s best 32 teams in Russia up for grabs.

Australia will kick off its Group B campaign with a home clash against Iraq on Thursday 1 September 2016 with this stage of World Cup Qualifying coming to an end in September 2017.

The top two teams from both groups will progress directly to the 2018 FIFA World Cup in Russia with the two 3rd-placed countries facing off home and away in the Asian play-off on 5 and 10 October 2017.

The winner of the Asian playoff will then face a CONCACAF nation home and away on 6 and 14 November 2017 for the final place at the 2018 FIFA World Cup.

Socceroos Head Coach Ange Postecoglou, who attended the draw in Kuala Lumpur along with FFA CEO David Gallop, said: “It’s good to know the draw so we have a clear picture of what is in front of us from a football and logistics perspective to qualify for the World Cup,” Postecoglou said.

“Over the last two years we have built up a very strong portfolio of information on most Asian nations and its players by having scouts at matches and tournaments all over Asia so the players go into every match well prepared. That information will be sharpened and expanded now we know that we face Japan, Iraq, UAE, Saudi Arabia and Thailand.

“As Champions of Asia we will show due respect to all countries but focussed on continuing our journey that has aspirations greater than simply qualifying for the World Cup.”

*Venue and kick off details will be confirmed at a later date.