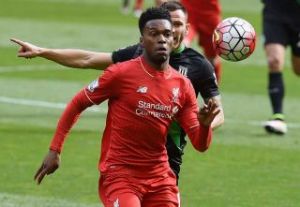 Divock Origi made a striking impact from the bench with two goals as a much-changed Liverpool side earned a 4-1 victory over Stoke City.

Jurgen Klopp opted to start Origi ahead of Daniel Sturridge in last Thursday’s UEFA Europa League quarter-final first leg, but the young Belgian rewarded his manager’s faith with a crucial away goal at Signal Iduna Park.

And Origi was at it again at Anfield on Sunday as he bagged a brace playing the second half in place of Sheyi Ojo, who also impressed on his first Barclays Premier League start.

Klopp made seven changes to his XI with Thursday’s second leg against his former club in mind, with the recalled Sturridge showing his quality with a close-range header that restored Liverpool’s lead before the break after Bojan Krkic had equalised Alberto Moreno’s early strike.

It took Origi just five minutes to get himself on the scoresheet with Liverpool’s third of the match as he nodded James Milner’s delivery past Jakob Haugaard, and the 20-year-old’s cross-cum-shot added gloss to the scoreline with 25 minutes remaining.

Klopp, who took the opportunity to rest Philippe Coutinho but was able to field Lucas Leiva from the bench after his thigh injury, sees his side climb above Stoke into eighth place in the table and can reflect on a job well done ahead of Thursday’s visit of Dortmund.

Liverpool enjoyed the better of the opening stages and took the lead in the eighth minute, when two of the four men to keep their places after the trip to Germany combined.

Milner fed Moreno with a quick free-kick after being fouled by Phil Bardsley, and the Spaniard fizzed a dipping long-range drive past Jack Butland’s deputy Haugaard for his first goal of the season.

But Stoke were level by the midway point of the half when Bojan was afforded the space to glance in Xherdan Shaqiri’s free-kick from the left.

The visitors thought they had turned the contest on its head soon after when Peter Crouch headed in a superb cross from Erik Pieters, only for the offside flag to deny the former Liverpool striker.

And Stoke’s frustration was compounded by a moment of brilliance from Liverpool youngster Ojo, who drifted left before dancing his way past Shaqiri and sending an inch-perfect delivery across the face of goal to give Sturridge the easy task of nodding Klopp’s team back in front.

Origi replaced teenager Ojo at half-time, and the Belgian made an immediate impact after being left all alone to power a close-range header past the helpless Haugaard.

It was one-way traffic after the interval and Origi put the icing on Liverpool’s cake when he cut inside Bardsley and angled a ball in towards Sturridge that ended up in Haugaard’s far corner.

Liverpool manager Jurgen Klopp: “Today, I’m really proud. We made changes and it was a completely new formation,. I’m sure the players have never played together before in this line-up.

“Stoke played 70 to 80% long balls to Peter Crouch, and you have to be tuned into that. We were quickly tuned after a half-session on the training ground yesterday. It was a smart performance.”

Stoke City manager Mark Hughes: “It’s one of those days. When we needed to deal with things at source, we didn’t deal with that. That’s unlike us, we’re normally very resolute.

“Today’s result has hurt us obviously. We allowed Liverpool to go above us and teams around us are picking up points. But when we have a setback, we almost always bounce back, and we need to do that.”