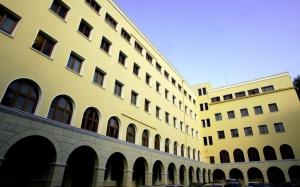 The Church of Greece is struggling financially as revenues dry up and taxes keep rising, with emblematic monasteries such as those of Petraki and Penteli in the capital putting a freeze on payments in order to make ends meet.

Churches and monasteries across the country are already facing problems paying salaries, seeking to settle their bills and property taxes in installments and selling off real estate to raise the cash to cover operating costs. The result is that their social programs are now at risk, such as soup kitchens for the poor, something that is expected to set off a domino effect of social implications as the Church is one of the driving forces in the effort to help the worst affected by the economic crisis in Greece.

As the Church scrambles to raise funds, the state keeps raising obstacles to investments, while a solution has yet to be found as regards its prime real estate assets. A total of 123 Church properties in Athens, Vouliagmeni, Piraeus and Thessaloniki have been sold to the state but not paid for, while the Church can no longer make use of them.

The Church of Greece has two main sources of income – real estate and National Bank of Greece shares – and both are drying up: Rents are declining and buyers are increasingly hard to come by, while NBG shares were at 0.23 euros at the time of going to print.

Speaking to Kathimerini, the general director of the Central Ecclesiastical Financial Service (EKYO), Father Salonon Antonios, explained that the Church participated in NBG’s share capital increases in 1996 and in 2005. In 2005, the shares were bought at 22 euros and their value reached 47.80 euros. In 2010, the Church again took part in NBG’s share capital increase, this time under pressure from high-ranking government officials and the local banking system who wanted to send a message of credibility and solvency. To participate in the process, the Church was granted a loan of 27 million euros from Hellenic Postbank and used another amount equal to that from its savings.

However, says Antonios, “the Church does not gamble,” suggesting that the shares should have been better managed and sold at peak price. This didn’t happen and then the crisis hit the Church as it did the country, with NBG stopping dividend payments in 2008 and the price of shares plummeting to levels at which they are not worth selling.

At the same time, the slump in the real estate market caused another major source of revenue to dry up for the Church, which has 19,000 hectares of arable land, 700 plots of land, 400 office spaces and 260 residences in its portfolio. Rents have dropped at rates of between 30 and 70 percent depending on location since 2008, many properties are untenanted and utilizing them is a headache because of the cost of maintenance – for which there is no cash.

“The Church’s revenues have declined by about 75 percent today compared with 2008. Then, the annual budget was around 23 million euros and today it is around 6 million euros,” says Antonios.

The Church has called on the state to take action to attract investors and to solve a number of problems that are preventing it from utilizing properties. For example, the Church owns a 130-hectare plot between Lake Vouliagmeni and the town of Varkiza on Athens’s southeastern coast, most of which is covered in sand and rocks. The Church has asked the state to approve a small construction quota so that a potential investor could build on 22.5 hectares and be obliged to plant the remaining 107.5 with trees, but so far it has been told that the decision on the area’s delineation is still pending.

The Church is also eager to utilize a large plot at Schisto near Piraeus, where there is rising demand for logistic centers and other port-related activities. The state has deemed the area forestland, while the Church has maps showing that this definition dates back to 1850 and has not been updated since.

Every metropolitan church, monastery and even parish church has assets that they themselves manage and each of these entities pays property and income tax – in contrast to popular belief. Petraki Monastery, struggling with salary payments, recently applied to enter a scheme that allows indebted taxpayers to pay their contributions in 100 installments. As further evidence to dispel the myth of the Church’s enormous wealth, sources told Kathimerini that Petraki Monastery’s real estate assets are limited to one building near Evangelismos Hospital in Kolonaki and another on Koumoundourou Square, both in central Athens though widely disparate in terms of property values.

Penteli Monastery is not faring much better, as it recently sold its single real estate asset in order to meet operating costs.

Antonios also explains that EKYO is responsible for funding to all metropolitan churches, most of which run programs to help the poor and the homeless, showing that these program will be at risk unless solutions are found.