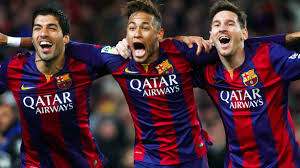 Lionel Messi, Neymar and Luis Suárez have scored 107 goals between them this season but after Barcelona’s celebrated trio failed to find the net in the defeat by Real Madrid, Luis Enrique defended them by declaring “they aren’t machines”.

The Barcelona manager said he was not concerned about the physical state of his all-star attacking line despite their below-par display in the 2-1 home defeat on Saturday.

Although Real halted their 39-game unbeaten run, Luis Enrique said he retained full confidence in his side as they prepared to host Atlético Madrid in the first leg of an all-Spanish Champions League quarter-final on Tuesday.

Messi (37), Suárez (43) and Neymar (27) have been scoring for fun but Barcelona’s only goal against Real came from the defender Gerard Piqué.

“They aren’t machines, they are the best players in their position but they aren’t unbeatable or unsurpassable,” Luis Enrique said on Monday. “I think all my players are in perfect condition. We had forgotten what it was like to lose but when you do you remember how difficult it is to win and we all hope the defeat serves as a stimulus to win again. Looking at how we have done in the last few months, I’m optimistic.”

Piqué reaffirmed his coach’s belief in his forwards. “Our three attackers are on another level, from another world. I’m not worried about them at all, it’s impossible for us to have more faith in them, they have brutal qualities and we’re so lucky to have them at Barça,” he said.

He was also adamant Barça would bounce back but said Atlético would pose even more problems than Zinedine Zidane’s men did. “We’re not scared of them but they are having a spectacular season, they are the second best team [in La Liga] and it’s going to be even harder for us than Saturday,” Piqué said.

Diego Simeone’s side have conceded only three goals in eight Champions League games this season, the joint best record in the competition alongside Real. They also have the meanest defence in La Liga, letting in 15 goals in 31 games – 11 fewer than Barcelona.

Atlético pipped Barcelona to the La Liga title in 2014 and knocked them out of the Champions League in the same season en route to the final. They are six points behind Luis Enrique’s side in La Liga and warmed up for their trip to Barcelona by thrashing Real Betis 5-1 on Saturday.

However, Barça have beaten Atlético in all six matches under Luis Enrique. Piqué said: “We’ll see how they approach the game but it’s all down to us, we need to move the ball around quickly and for the fans to put pressure on them. If that happens we’re practically unstoppable.”

Atlético are set for the return of Diego Godin after the defender’s absence of nearly three weeks because of a muscle injury. Stefan Savic, Yannick Carrasco and José María Giménez, who had been doubtful, also made the trip to Barcelona and will be available to play.

“We are feeling strong,” the Atlético defender Juanfran Torres said. “We know that our chances rely on staying alive after the game at the Camp Nou. Then we can try to seal the deal at the Vicente Calderón.”