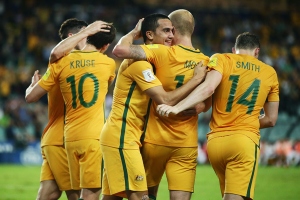 Australia has booked their place in the next round of qualifying for the 2018 World Cup, after a convincing win over Jordan in Sydney.

Australia were in cruise (Kruse?)  control for most of that second half, even if the subs took a bit of their rhythm away.
The Socceroos advance to the next phase of qualifying, topping the group quite easily in the end.
There was a lot to like about that performance against a decent Jordan side, albeit one that does not travel well.
I’m especially in love with the Aussie midfield, which really clicked well. Rogic, Mooy and Kruse were fluid in their movement, switching positions brilliantly and moving the ball around superbly. The full-backs Risdon and Smith enjoyed themselves immensely, getting forward constantly to join the attacks to good effect.
Timmy Cahill did what Timmy Cahill does, scoring two well-taken goals to bring his international tally to 47.
Top-shelf all-round showing.
source:abc.net.au