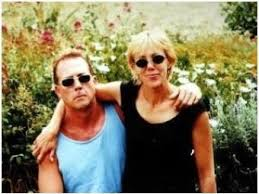 IN the hours before he was brutally murdered, Robert Pashkuss was spotted “waving his arms around” in a “heated and agitated discussion” with three men at his Caves Beach home, a coronial inquest has heard.

Mr Pashkuss, 51, and his 41-year-old partner Stacey McMaugh were bludgeoned to death inside their Macquarie Grove home sometime between 10.10pm on January 5, 2008 and 11am the following day.

The inquest heard Mr Pashkuss’ murder is more than likely to have been related to his drug dealing activities, while his partner, a lauded community volunteer, was a “completely innocent bystander”, who may have been murdered because she could identify the killers.

Counsel assisting Peggy Dwyer said Mr Pashkuss was a small-time cannabis dealer who hadn’t come to the attention of police for more than 20 years.

She said he had sold ice for a “relatively short time” and may have been murdered because he had wanted to move away from selling the substance in the month before his death.

Deputy State Coroner Hugh Dillon also heard Mr Pashkuss more than likely knew his killers and was comfortable enough to turn his back on them before he suffered at least eight heavy blows with a metal object.

While, Mr Pashkuss was killed in the kitchen, possibly while doing the dishes, Ms McMaugh suffered a similar fate while lying in bed.

Ms Dwyer said the house was always locked and Mr Pashkuss never sold drugs from home after about 8.30pm.

“This suggests that the person or persons who killed Robert and Stacey are likely to have known Robert for Robert to have let them into the house and particularly for Robert to have turned his back on them at the time of his death,” Ms Dwyer said.

See your ad here
Ms Dwyer also publicly named four men who may be able to assist with the investigation.

Andrew Lovett, Matthew Crawford, Mark Lamborn and Owen Keeley have not been named as suspects in the murder, but will be subpoenaed to give evidence when the inquest reconvenes in June, Ms Dwyer said.

The government has offered a $100,000 reward for information leading to the identification of the killers.

Mr Dillon said despite dealing cannabis, there was no evidence Mr Pashkuss was a violent person or a “gangster”.

“Whatever anybody thinks about people dealing drugs, nobody deserves the treatment that Robert and Stacey got,” Mr Dillon said.

“It was a shocking crime and unfortunately because we have not identified yet who committed this crime that person might still be out on the streets somewhere.”

He said unsolved crimes do not always remain that way. “While time seems to move very slowly, sometimes it catches up with people.

“In fact, [recently] a woman was arrested for the murder of her child who disappeared back in 2001.

“15 years is a very long time between someone’s death and the arrest. “But with improvements in investigation techniques, science and rapid improvements in DNA testing, an unsolved homicide does not always remain unsolved.

“Time can catch up with people and with any luck in this case it will.”

The inquest will reconvene in Newcastle on June 15.

Anyone with any information can contact Crime Stoppers anonymously.