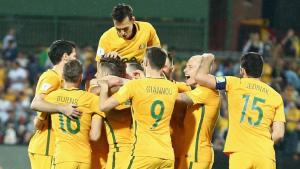 WHOEVER lines up for the Socceroos against Jordan will have earned their place and Ange Postecoglou said they should be happy and see it as a privilege.

The head coach believes that players should revel in their selection for Australia each time it occurs because there’s no guarantees for anyone.

And in a vital World Cup qualifier against Jordan — who the Socceroos lost to last time in Amman — a starting position indicates just how important that player is to the team.

Australia has secured its progression to the next stage of qualifying, with a top two finish in Group B now guaranteed. While not every second placed team will progress, the Socceroos’ results have ensured they will, at worst, be one of the four best runners up from the eight groups, enough to earn a ticket to stage three.

But securing a win or draw against Jordan remains a crucial outcome of Tuesday’s match, with seedings for the next round directly affected by the placings in each group.

So it’s little surprise Ange Postecoglou has claimed that picking his team for the clash has nothing to do with expectations.

“It’s not about people keeping people happy, people’s enjoyment and happiness should be defined by the fact they see this as a privilege,” said Postecoglou.

“I reckon every time I select them they should be happy. There’s no expectations beyond that. This is not club football, you don’t sign up for your country for 10 years to play. It’s not how international football works.

“Club football is where they can be kept happy — with me it’s about coming up, doing your duty and hopefully creating some moments that do something for football and our country.”

With that said, who will start for Australia against Jordan?

Postecoglou’s side has sealed its progression to the next stage and only needs a draw to secure top spot in their Asian World Cup qualifying group.

But a loss would see Jordan leapfrog the Socceroos into top spot and leave them facing a difficult draw in the next round.

The removal of Indonesia from Group F meant that, to level the playing field, the results of the bottom side in each group would be wiped/

In the case of Group B it means that Bangladesh’s one draw, seven losses and -30 goal difference will no longer count to the final group results. This means that in effect the Socceroos will lose six points and nine goals, however it will have no effect on their final standing in the group.

The Socceroos were defeated 2-0 by Jordan in their last World Cup qualifier in Amman, but this time the evidence points to a different result in Sydney.

Australia has won nine of 11 home games under Ange Postecoglou and have kept clean sheets in all three of their home games this World Cup qualifying campaign. That is contrasting statistic to their away form. Nine of Australia’s 10 losses under Postecoglou have been inflicted on the road — the most recent coming in Jordan.

On home soil in front of a bumper crowd at the Sydney Football Stadium, the Socceroos should have no issues scoring past the visitors.

2. WHO’LL LOOK FOR GOALS UP FRONT?

Apostolos Giannou has been touted as the Socceroos’ long-term attacking focal point. He impressed on debut against Tajikistan with four goal assists, six shots and the winning of two penalties. Because of Postecoglou’s experience of coaching him as a junior, the 26-year-old will be given an opportunity to grow into the role as the team’s attacking pivot. The manager also sees his ability to link-up with the likes of Robbie Kruse, Mathew Leckie, Tom Rogic and Aaron Mooy. So where does that leave the team’s pin-up boy in Cahill?

Tim Cahill didn’t feature against Tajikistan, with Postecoglou giving Giannou his first start. Australia’s greatest ever goalscorer has a stellar World Cup qualifying record (20 goals in 26 matches), but will the coach use him in the crunch match against Jordan? After Giannou’s great first performance Postecoglou will face a difficult decision on who should lead the line on Tuesday.

3. WHO MARSHALLS THE MIDDLE?

Postecoglou’s biggest headache may be fitting Aaron Mooy, Tom Rogic and Massimo Luongo on the field together.

Mark Milligan is expected to step in for captain Mile Jedinak who’s nursing a hamstring injury, so that leaves two or three attacking midfielder spots to be played with.

Mooy and Luongo started against Tajikistan and the latter was replaced by Rogic after scoring. But the Celtic playmaker made a strong case to start against Jordan by impressively netting twice on Thursday night.

So could they all play together against Jordan?

“It depends — the way were evolving our play, it’s not just those three competing for spots,” Postecoglou said.

“It’s a great weapon to have … if I start with Aaron or Mass, I can throw Tom on for the last half an hour, and no team is going to like that.

“If I start with Tom and Mass, I can thrown Aaron on. Or all three.”

4. WHO KEEPS THE BACK ROCK SOLID?

Postecoglou employed the central-defence of Trent Sainsbury and Bailey Wright against Tajikistan, and they did not have not much work to do. It’s quite possible that the coach will want to have a further dabble with that combination, but he also has another option in Alex Wilkinson.

The task of picking the wide defensive players could be more difficult. Liverpool’s Brad Smith was emphatic in his fifth cap as was right-back Ryan McGowan, both consistently getting forward and executing dangerous crosses into the opposition’s box. Alex Gersbach has a tough task to usurp Smith, and Postecoglou may choose to stick with what he knows in such a crucial match. Jason Geria and Josh Risdon didn’t notch a Socceroos cap against Tajikistan, so it doesn’t seem likely that they’ll have the chance against Jordan.

5. WHAT IS JORDAN’S MAIN THREAT?

With Harry Redknapp at the helm, Jordan go into the match with nothing to lose and everything to gain.

The Jordanians will attempt to stay compact and press to force errors from the Socceroos. After that tactic worked for their win in Amman, they’ll attempt to pounce on Australia in the same manner.

Though in both of Australia’s defeats at the hands of Jordan, Hassan Abdel-Fattah has scored. Luckily for the Socceroos he won’t feature this time round.

But Jordan has other attacking threats. Speedy striker Hamza Al-Dardour successfully disrupted the Socceroos’s flow in Amman last year and scored a hat-trick against Bangladesh last week. He would be key to a Jordanian upset.

Midfielder Abdallah Deeb and forward Baha Faisal are other players to watch, while keeper and captain Amer Shafi has a big presence in goal.

“Our biggest task is trying to control their dangerous men,” said Trent Sainsbury.

“It’s going to be a good challenge but the boys are up for it. They’re going to come out fighting which for an Aussie you love.”

No doubt a fascinating contest awaits.