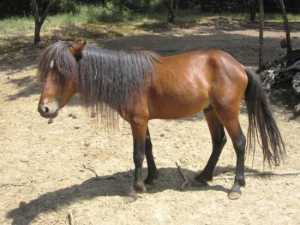 Breeders struggle to prevent the extinction of Greece’s rarest horse

The Skyrian pony is one of the rerest horse breeds in the world. This small-bodied native Greek horse is a protected species.

Less than 152 Skyrian horses live on Skyros island and not even two hundred can be found throughout Greece.

In ancient times, Skyrian horses were an export and lived throughout the then country’s borders.

The Skyrian horses are a particularly friendly, social, robust and intelligent breed with similar body type to that of the normal horse.

Their height, however, does not exceed the maximum of 116 cm and their hooves don’t need shoeing.

Some horses have a white mark on the face accentuating their dark red or chestnut hue.

Greek breeders are currently struggling to save the horse from extinction.

On a more positive note, the endangered species has found an ally on another island, in Scotland.

Veterinarian Sheilagh Brown, 54, of Overton Bush fascinated by the breed’s unique genetic makeup took over Scotland’s only herd, aspiring to increase the numbers.

“I would like to do some more detailed genetic tests and I have liaised with Greek colleagues to do this, but we have not identified a source of funding yet.”

“I am thoroughly enjoying breeding the ponies and looking after them,” Brown told Horsetalk.

Brown went to see him in the middle of last year as she was looking to buy another Exmoor pony. He asked her if she was interested in taking over the Skyrian herd, which then stood at 14, to keep the breeding programme going. She agreed.

The numbers have since grown to 22. Some are now distributed among horse enthusiasts in southern Scotland to ease pressure on Brown’s grazing.