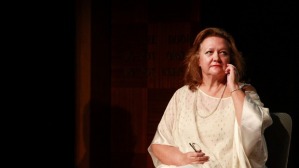 In the past five years Ms Rinehart has topped Forbes Australia’s rich list, but this year she has been unseated by another woman – reclusive American heiress and longtime Australian resident Blair Parry-Okeden.

Forbes says Ms Parry-Okeden, who grew up in Hawaii and moved to her ex-husband’s country of birth Australia decades ago, was recently confirmed to be an Australian citizen.

After her mother’s 2007, death she inherited a quarter of US media conglomerate Cox Enterprises, America’s third-biggest cable TV company.

This is not the first time Forbes has named Ms Parry-Okeden as Australia’s richest person. She first took the title in 2009, overtaking mining magnate Andrew “Twiggy” Forrest for the top spot

Forbes says Ms Rinehart’s wealth has slipped $US3.2 billion in the past year, mainly due to falling iron ore prices and a legal ruling which impacted her shareholding in Hancock Prospecting.

Ms Rinehart’s wealth erosion was the largest in dollar terms, but fellow iron ore miner Andrew Forrest’s wealth took the biggest percentage hit: down 41 per cent, sending him down 12 spots on the rich list to No. 22.

Property baron Harry Triguboff ranks number three on this year’s list, with a net worth of $US6.9 billion ($9.8 billion).

Rising rents and increased demand for his Sydney apartments helped drive up Mr Triguboff’s fortune by $US1.3 billion, Forbes says.

Property sales of his apartment tower development company, Meriton, are expected to rise 70 per cent this year.

The biggest winner on the rich scale in percentage terms was Atlassian co-founder Mike Cannon-Brookes. His wealth jumped 62 per cent to $US1.78 billion after the successful float of the software company on the US sharemarket in December. Atlassian’s co-founder, Scott Farquhar, is right behind him.