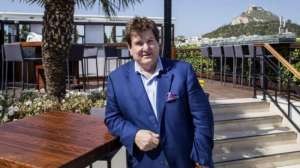 ‘The country has been breeding bludgers,’ says Con Makris

He may have built a property empire worth more than $1 billion dollars, but Con Makris still remains a regular, hard-working man who doesn’t forget his origins. In an interview with the Australian Financial Review, the billionaire expressed his distrust towards the share market, his disappointment in a large part of Australian youth, that he describes as “bludgers”, his agreement with Malcolm Turnbull’s views, while offering advice to prospective investors – which can be summed up in one phrase: work hard and stay away from “paper money”.

The first Greek migrant to reach billionaire status in Australia, Con Makris expressed his sadness over the plight of Greek people, suffering from the ongoing financial crisis, predicting a long, painful road to recovery.

“Greece is a magnificent place that needs a good, strong government,” he said, stating that focus on infrastructure and tourism is crucial for the country’s return to growth.

Placed at No. 47 on the Business Review Weekly Rich 200 list, Makris – who arrived in Australia from Greece when he was 16 years old – built his wealth from very modest beginnings, running barbecue chicken shops. Early in his business career he developed a strong work ethic from which he has never deviated. He started off working seven days a week for up to 14 hours a day, expanding his business to property development and shopping centre ownership. Since his phenomenal rise in the 1980s, mostly in South Australia and Queensland, he has remained a firm believer in the fundamentals of investing in bricks and mortar in the right locations, and picking trends that will ensure the values of those commercial properties and shopping centres continue to rise.

‘NOBODY LOSES ON LAND’

As for his well-documented aversion to the share market, it is due to the volatile nature of shares. To him, the increasingly complex world of derivatives, hedge fund trading and short selling exacerbates the extreme fluctuations and can mean that vast amounts of share market wealth on paper can go up in smoke in a short space of time.

“I never follow paper money”, he told the Australian Financial Review, adding: “Why buy shares? It’s crazy. Nobody loses on land.” An advocate of the security of bricks and mortar, Makris insists that location is still the single biggest factor that will add value over the long term, as it has been doing for the past five decades. According to him, this principle will survive even as the Australian economy continues to strive for the next couple of years.
Asked to comment on the increases in interest rates, he told the AFR that there will inevitably be some fall-out among those who’ve borrowed too heavily to fund projects, but most business people and property owners enter transactions with long-term horizons.

“The whole world is working on the basis that there won’t be inflation but things can change quickly,” he said.

The richest man in South Australia also expressed his support for Malcolm Turnbull, who “is a businessman and he understands what needs to happen to get things moving”. The prime minister’s call for innovation is seen by the billionaire as a move towards building an entrepreneurial culture in Australia.
However any effort to rebuild confidence after the decline of the mining industry is bound to meet a very specific obstacle: young Australians, who have lost their work ethic, nurtured by the state to being used to a “hand-out mentality”.

“The country has been breeding bludgers,” he says bluntly. “Too many people are looking for a lifestyle. They want to go to Byron Bay and those sort of places and sit in the sun all day.”

Despite being South Australia’s richest man, Makris won’t rest on his laurels. He is about to start work on a $200 million development which will include a 160-room Sheraton hotel along with residential apartments, retail space and offices.
It’s all located on a prominent site in affluent North Adelaide which has been vacant since 1989. The billionaire believes that the suburb’s time has finally arrived and describes North Adelaide as the equivalent of Toorak in Melbourne, and similar to Woollahra in Sydney. It is a suburb just one kilometre from the central business district, but the catalyst for the development has been the $535 million redevelopment of the Adelaide Oval, which now hosts Australian Football League matches for the first time since 1974, and was the location for the first day/night cricket test with the infamous pink ball in late November when Australia played New Zealand.

The oval is within walking distance of the new $200 million Sheraton development, with regular AFL crowds of 50,000 spilling into the nearby suburbs and the CBD, where dozens of new small bars have opened up as the state government relaxed liquor licensing laws.
Makris is a firm supporter of such pro-business measures and points out a policy applied by South Australian Treasurer Tom Koutsantonis. He brought forward the first tranche of stamp duty cuts on commercial properties in early December, 2015 with immediate effect, switching from an original plan where those stamp duties would be shaved by one-third in mid-2016, with the next third sliced in mid-2017 followed by full abolishment in mid-2018.
“I think it’s a very smart move,” Makris told the AFR.