FIFA Ballon d’Or LIVE: Follow the action as Cristiano Ronaldo, Lionel Messi and Neymar battle for the 2015 gong in Zurich

Lionel Messi moved brilliance to another level as he was presented with the Ballon D’Or for the fifth time in his extraordinary career.

The greatest player of this generation was recognised by international captains, managers and journalists for his outstanding performances during 2015, when Barcelona became the first team to complete the treble of league, cup and Champions League for the second time.

Messi’s performances were, at times, mesmerising and his highlights from the past 12 months include his goal against Bayern Munich in the Champions League semi-final, when he chipped Manuel Neuer from six yards, and his solo run against Atletic Bilbao in the Copa del Rey final.

That goal was a contender for the Puskas Award, which is given to mark the previous year’s golden goal, but on this occasion, Messi had to settle for minor honours. Wendell Lira, a Brazilian forward, won it for his spectacular overhead kick for Goianesia.

Still, he arrived in Zurich on Monday at the peak of his powers, which was a stark contrast to 12 months ago when he was sullen amid intense speculation that all was not well behind the scenes at the Nou Camp after Messi had been dropped for a game against Real Sociedad.

His numbers since, though, have been stunning, with 53 appearances for Barcelona over the calendar year yielding 48 goals and 23 assists. Cristiano Ronaldo, his great foe, may have outscored him – 54 in 52 games for Real Madrid – but Messi’s form has been on another level. Those figures would have been even greater had a hamstring injury not cost him two months.

‘It is a very special moment for me to be back on this stage having watched Cristiano (Ronaldo) win it for the last two years,’ said Messi, who was clearly overcome when presented with the award in Zurich’s Kongresshaus.

‘It is incredible that it is my fifth Ballon d’Or, it is more than anything I could have dreamed of when I was a kid. I want to thank all my team-mates as without them none of this would be possible. I also want to thank football for everything, both the good and the bad. It has made me learn.’

There is undoubtedly a degree of ostentation to the Ballon d’Or ceremony, which is growing bigger by the year, but that should not detract from how remarkable Messi has been over the past decade. He has been first or second every year since 2008.

To put this into context, luminaries such as Zinedine Zidane, Ronaldinho and Luis Figo only won the Ballon d’Or once and it is difficult to imagine a time in the future when his figure is eclipsed. Certainly, his compatriot Ezequiel Lavazzi, the Paris Saint-Germain forward, thinks that will be impossible as he envisages more success for Messi.

‘He is breaking all kinds of records,’ said Lavezzi of a player who has scored 458 goals for Barcelona. ‘When is he going to stop? It all depends on him, really. When it comes to difficult games, he is always there. He makes a difference when teams most need it. He can score any type of goal. He can be on the pitch for a little, score two goals then he goes home happy.’

So what was Messi’s highlight of 2015? And what is the motivation to keep going when he has done everything there is to be done in Catalonia?

‘I try to beat my previous self and reach all our goals,’ said Messi. ‘Last year thankfully I managed to reach almost all of them. It was an amazing year that filled us with pride after such good work. It is hard to single out one moment. Our year was full of happiness and victories. It is hard to pick one.

‘These are good players (at Barcelona) with extraordinary quality. We hope that they are going to make us grow. I feel proud of having achieved everything that I have achieved, all my titles. It is always harder to win when you have won before. To come here for the ninth time is truly amazing.’

If there is to be someone who comes and challenges his supremacy in the future, it will be his colleague Neymar. The Brazilian, who is every inch a superstar, looks primed to get better and better in Barcelona. He has thrived under Luis Enrique, who was named Coach of the Year, but all he is thinking of for the moment is about self-improvement.

‘I don’t know if I am up to their level,’ Neymar said, when asked how he compares himself to Messi and Ronaldo. ‘These are two idols and if you have idols, it is difficult to perceive yourself as an equal or better. I have admired them for many years and it is an honour to be here with them.

‘I want to improve every single match and that is more important than being better than them. I am happy. The goals I have to thank my team-mates for that, Leo and the others. We set our own goals, our own history. Those two have made history and are still making it.’ 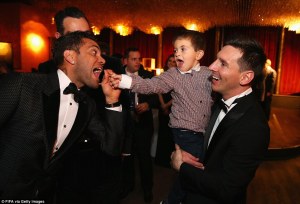