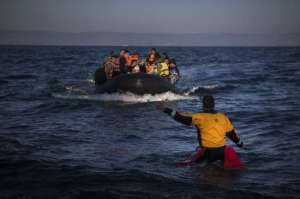 A campaign has been launched online in a bid to recognise the efforts of Greek locals on the islands of the East Aegean, namely Lesvos, for their unwavering assistance and generosity during the refugee crisis as recipients of the Nobel Peace Prize.

“The native populations of the Greek Islands in the Aegean Sea (and many other external, worldwide, non-profit organizations and diaspora Greeks) have done and are doing anything possible to help the displaced Syrian refugees and make them as comfortable as possible, although they themselves have very little to offer,” reads the global campaign on the Aveez website.

Set up by an American going by the name of Stephen K, once the campaign draws to a close the activist has plans to send the signatures to the Nobel Prize Committee.

Considered to be the biggest wave of mass migration since the second world war, of the estimated 900,000 migrants to have arrived in Europe last year, at least 750,000 have travelled through Greece, 60 per cent of which arrived on the shores of Lesvos.

Included amongst the numerous acts of kindness were locals scrambling to find dry clothes for those arriving on the shores, along with mothers and grandmothers from around the islands caring for babies and young children found unassisted and without parents.

Many churches have been converted into makeshift clinics with the assistance of volunteer nurses and doctors catering to the injured as hospitals and emergency services have been stretched to their limits.

While local authorities have been hard at work trying to track down the names of any refugees missing at sea.

Aside from their general willingness to assist the refugees with food, shelter and medical care, the campaign also endeavours to highlight that the influx of refugees occurred during a particularly difficult time for Greece, which has found itself at the centre of a harsh economic crisis barely able to assist and cater for its own people.

“Despite being subjected to a severe economic crisis for many years[,] they have shown their Christ-like behaviour with acts of filotimo, love, respect and filoxenia to those who are total strangers to them!” reads the campaign.

Stephen hopes these acts and sacrifices do not go unrecognised, stating that the actions of the Greeks have been “significant contributors to World Peace and Stability, and are clear examples of love for others in the world to use and to learn from.”

To date, the campaign has already attracted more than 43, 530 signatures, close to reaching its target of 50,000.