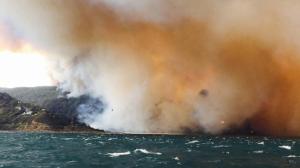 THE most destructive blazes in Victoria since Black Saturday in 2009 are expected to rage for weeks.

They spread across five towns in the southwest and razed at least 116 homes.

The 2200ha Jamieson Track fire destroyed 98 homes in Wye River and 18 in Separation Creek as it swept through bushland and began to ­advance toward the town of Lorne on Christmas Day.

RESIDENTS finally able to return to their homes in Lorne Saturday morning;

THE Insurance Council of Australia declared the bushfires a catastrophe, estimating initial losses of $25 million.

EMERGENCY grants of up to $1300 were paid to evacuated households, with the State Government promising further assistance of up to $32,500 for those left homeless.

Premier Daniel Andrews praised the effort of emergency services who had been working around the clock to battle the blaze, as well as people who had opened up their homes to support those who had been evacuated or lost their homes.

“This is one of those times when the very worst of circumstances brings out the very best in our state,” Mr Andrews said.

The blaze originally started from lightning on the evening of December 19.

Mr Andrews said authorities would communicate with people who had lost their homes over the next 24 hours.

The blaze was stopped by CFA crews about 500m short of Kennett River. Mr Andrews said more properties could have been lost.

He praised the work of emergency services personnel for avoiding any injuries or loss of life yesterday.

Fire authorities said hot weather was forecast for New Year’s Eve but the winds were not predicted to cause extreme conditions.

Locals were left to count the cost yesterday including a CFA volunteer who watched his Wye River home burn as he tried to protect the town.

Tony Maly made the “gut-wrenching” phone call from the fire front to his wife Lesley yesterday morning to tell her their home was destroyed.

Meanwhile, the CFA warned there were still a number of hazardous burnt trees that could be dangerous.

Septic systems may have been damaged and leakage from these systems could pose a health hazard.
Blazes still a threat

COMBATING the devastating Lorne bushfire could take “weeks and weeks”, with some residents still uncertain whether their homes had survived.
Incident controller Alistair Drayton told hundreds of concerned residents at Cumberland Lorne Resort they were still assessing the safety of the Wye River township.

“It’s going to take weeks and weeks to combat this one,” he said.

Mr Drayton said they had not secured a containment line to the west of the fire and was concerned conditions could worsen when the temperature rises in the coming days.

He said Wye River residents would not be let into the fire zone due to safety ­concerns.

“The power is off but (fallen) solar power live wires are a danger,” he said.

Asbestos from burned old homes and falling gum trees were also a concern.

Separation Creek residents were told they would be escorted by the Red Cross to view their homes last night.

They would be told prior if their home had burned down.

“We want to reassure tonight that we are here for you,” Mr Drayton said.

Many residents raised concerns about an influx of tourists to Lorne in the New Year.

One man said he was concerned that foreign tourists were unknowingly entering the fire ground because they could not understand the road signs in place.

Others were concerned more people would visit Lorne for Falls Festival next week.

While Lorne was spared the fire storm, the town feared big tourism losses could add to the devastation for locals.

The fire had a dramatic effect on visitor numbers in town with the main street virtually deserted yesterday.

The foreshore caravan park, usually packed with holidaymakers, was deserted.

It was the same situation throughout the tourist town, usually teeming with visitors.