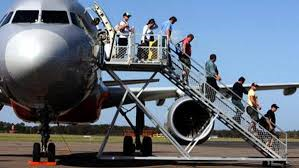 INTERNATIONAL flights out of Newcastle Airport have moved a step closer with the state government announcing a funding deal to fit out new customs and immigration offices.

The airport has secured almost $900,000 through the state’s Regional Tourism Infrastructure Fund.

While no airline has yet committed to operating international flights into or out of Newcastle, it has been confirmed that the airport’s board is in advanced talks with several operators.

The most likely initial international route is a trans-Tasman service to New Zealand, while the likes of Thailand and other parts of South-East Asia are also on the radar.

An airport spokesperson said current facilities at Newcastle can only accommodate carriers with thin-bodied aircraft such as the A320 and 737 aircraft. Qantas, Air New Zealand, Jetstar and Virgin all operate such aircraft on international routes.

Parliamentary Secretary for the Hunter Scot MacDonald said the funding was a “worthy investment” which would create more jobs in the region and provide both economic and tourism growth.

He said the funding was “fantastic news” and will allow for the installation of the infrastructure and technology required to process international passengers.

“These upgrades are essential to support the introduction of any future international services at the airport,” he said.

See your ad here
“It will allow us to complete the fit-out of our dedicated area for customs, immigration and quarantine facilities,” he said.

“Our recent terminal expansion provided us with the space for these services and this funding allows us to bring them to life.”

The passenger airport recently underwent a $14.5 million renovation which made room for international customs offices but money was required to fit them out with the right equipment.

State Regional Development Minister John Barilaro said the fit-out was among 17 other projects to get the funding nod. Each is aimed at boosting tourism infrastructure in regional areas, he said.

International services from Newcastle have been on the radar for years but have been hampered by delays in negotiations with airlines, market fluctuations, limitations on runway lengths and immigration facilities.

As part of its $1.5 billion upgrade to its neighbouring RAAF base, the Department of Defence, which owns the Newcastle runways, recently completed extensions to the runway and adjoining aprons.

The news is the latest boost for the airport which continues to cater for unprecedented passenger numbers. Only last week, FlyPelican began new daily services to Ballina. FlyPelican also operates daily services to Canberra which had been lacking since the collapse of Brindabella Airlines three years ago.

The move also follows the release of new tourism figures which show more international travellers putting Newcastle and the Hunter on their itineraries, not just in the area of leisure tourism but for business travel.

Figures collated by Destination NSW show the number of nights spent by domestic and international business travellers in the Hunter region in the 12 months to June this year was up 59 per cent on the previous year.