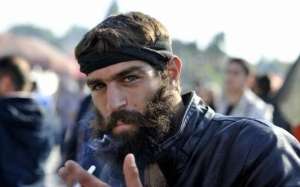 His raw style has modelling agencies vying for to sign him

A Greek beekeeper is the new face in demand by television and modelling agencies across the globe, after his photograph went viral.

The Cretan heartthrob, Stathis Stivaktakis, was photographed while taking part in a farmer’s protest at Syntagma Square in the centre of Athens, where he was taking a stand against a planned tax increase.

Dubbed ‘the sexy Cretan’, the 25-year-old with dark hair and blue eyes, has not only been a hit amongst locals, his face capturing global attention thanks to the BBC and Reuters.

In all the excitement, Stivaktakis was asked to make an appearance on Crete TV, where he made it clear he was not interested in the spotlight, and said that his love for the island was too great to ever leave.

“I don’t want to be judged for my looks, but for my mind and soul,” he said. 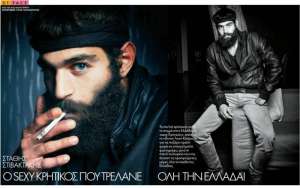 Since then however, it appears the young Cretan has had a slight change of heart, agreeing to be photographed for Cyprus edition of Down Town magazine (pictured above).