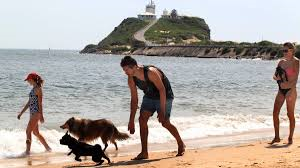 THE Hunter has sweated through its second 40-degree day in a week, with hot and blustery conditions forcing many to head to the beach.

The oppressive weather reached its peak during mid-afternoon on Thursday, with Williamtown, Tocal and Maitland all eclipsing the 40-degree mark.

Several other suburbs, including Cooranbong, Cessnock, Singleton, Newcastle, Scone and Norah Head were just a shade away from cracking the 40-mark.

The hottest temperature recorded in the Hunter on Thursday was 41 at Williamtown, four degrees shy of the November record for the Hunter in the past 10 years.

With vandals leaving Newcastle Ocean Baths high and dry for much of the day, many headed to Merewether to cool off.
Horseshoe Beach was popular among dog owners looking to beat the heat, while decent surf at the Cowrie Hole had plenty of boardriders in the line-up.

Further west, the stifling conditions created a constant threat of bushfire, with a total fire ban in place and the RFS on high alert.