“Starve IS of cash”- Yanis Varoufakis 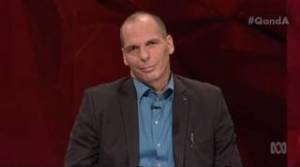 ‘I think there is only one answer. You open the door [to refugees] and you give them shelter’ … former finance minister of Greece and Q&A panellist Yanis Varoufakis. Photo: ABC

The former finance minister of Greece Yanis Varoufakis answered his question backed by the experiences of a country that has borne the brunt of Europe’s refugee crisis.

“There’s no doubt that when you have a massive exodus of refugees, there may very well be a couple of insurgents that infiltrate. But it’s neither here nor there,” Varoufakis said.
“Both the terrorist attacks and the refugee influx are symptoms of the same problem but one doesn’t cause the other. “There is a correlation but no causation,” he said.

“The vast majority of the people who exploded bombs, and blew themselves up, and took AK47s to mow people down, these were people who were born in France, in Belgium. Think of the bombings in London. Britain doesn’t have free movement [over its borders] it is not part of the Schengen treaty. So the notion that we’re going to overcome this problem by erecting fences, electrifying them, and shooting people who try to scale them … the only people who benefit from that are the traffickers, because their price goes up … and Isis. They are the only beneficiaries.”

Referring to the thousands of refugees who fled the Islamic State and “washed up on [Greece’s] shores”, Varoufakis said one simple thought came to his mind:
“If somebody knocks on your door at three in the morning, they are wet, bleeding, they’ve been shot at, they’re frightened, what do you do? I think there is only one answer. You open the door and you give them shelter,” he said.