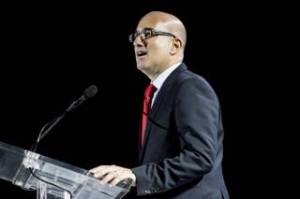 Amid talk of finding a replacement for ABC managing director Mark Scott, a number of names have been circulating, including Sky News Australia CEO Angelos Frangopoulos.

According to reports, the ABC board are keen to name a replacement as soon as possible, with short-listed candidates expected to be interviewed in the next fortnight.

Neos Kosmos got in touch with Mr Frangopoulos regarding the speculation of his candidacy. Choosing not to give much away, he said “I am very committed to my role at Sky News, which continues to be a very exciting business to be part of”.

Having pursued his tertiary studies in journalism, Mr Frangopoulos worked as a reporter and producer with the Nine Network and British Sky Broadcasting.

He was appointed CEO of Sky News Australia in 2000, and sits on a number of boards, including the Walkey Foundation for Journalism.
Though Mr Frangopoulos boasts an impressive CV, it has been noted that Sky News is a much smaller organisation compared to that of the ABC, which could influence decision makers.

But whoever takes out the top job can be assured of one thing; they will be handsomely rewarded for their hard work.

The successful candidate is expected to be finalised by the end of the year.