Sydney man, 91, alleged to be the world’s oldest drug smuggler to stand trial 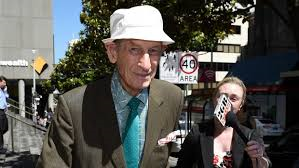 A 91-year-old Sydney man accused of smuggling cocaine has been committed to stand trial early next year.

Victor Paul Bernard Twartz, a retired oral surgeon, was arrested in July at Sydney Airport on his return from a trip to India. Police say they found in his luggage 4.5 kilograms of cocaine encased in 27 bars of coloured soap.

The Eastwood man was charged with drug trafficking. If guilty, he may be the world’s oldest drug smuggler.

Mr Twartz was arraigned in the Sydney Downing Centre District Court on Friday morning, his trial date set down for February 22.

Mr Twartz lives in a nursing home with special care. He said he was a teetotaller and “1000 per cent against any drug”.

He is older than Ola Mae Agee, who was labelled the world’s oldest dealer in 2011 when she was jailed, at age 87, for selling crack from her house in Florida.

Francis Cook was labelled Britain’s oldest drug dealer in 2012 when he was convicted at age 83 of growing almost 200 cannabis plants.

In Sydney, great-grandmother Barbara Stiff, 78, was handed a four-month suspended jail sentence in 2014 for selling cannabis from her Malabar unit.

The maximum penalty for drug trafficking in NSW is life imprisonment.