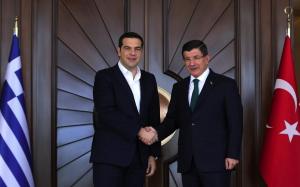 Greece and Turkey must step up cooperation in the fight against smugglers who are transporting hundreds of thousands of refugees and migrants to Europe from Turkey through the Greek islands, Greek Prime Minister Alexis Tsipras said on Wednesday.

“We need to take more steps towards coordination, understanding in order to effectively hit the smuggling rings which are an insult against human dignity,” Tsipras told a joint press conference in Ankara with his Turkish counterpart Ahmet Davutoglu.

About 650,000 refugees and migrants fleeing war and poverty have reached the European Union through Greece so far this year, risking their lives in overcrowded, flimsy boats. Thousands have drowned.

Speaking on the Cyprus issue, Davutoglu said the two neighbors have a window of opportunity to act on the partition of the Mediterranean island.

“There is a window of opportunity right now over the Cyprus issue. The negotiations are going on. We have a common approach with Greece to contribute positively to the talks,” Davutoglu said.

Cyprus has been split along ethnic lines since a Turkish invasion in 1974 triggered by a brief, Greek-inspired coup.

Davutoglu added he believed Athens would increase support for Ankara’s bid to join the EU.