Melbourne Victory:Barbarouses out for United match

Barbarouses out for United match Kosta Barbarouses will be on hand for Victory when a number of players get called up for international duty. Photo: AAP/Joe Castro.

New Zealand Greek Kostas Barbarouses will sit out the match thanks to hamstring issues.

Coach Kevin Muscat had to make do without the impressive striker in Victory’s last match, but the team were able to carve out an easy 3-0 win against Western Sydney Wanderers.

He will at least have him by his side when a large chunk of players are poached by Ange Postecoglou for Socceroos duty.

Kosta Barbarouses will be on hand for Victory when a number of players get called up for international duty. Photo: AAP/Joe Castro.

Barbarouses wasn’t chosen for international duty for the All Whites and will remain with his team to fill the gaps.

Muscat is expecting to tread cautiously with their match against United, hoping to see what he will get on game day and adjust accordingly.

“We’ll be patient, albeit with a very attacking intent,” he said. “We’ll … wait for those moments, because we’ve certainly got the personnel throughout our team that can make a difference.”

United have had problems with concentration and a lack of focus, and it has cost them.

They were taken for a ride two weeks ago by Melbourne City, when they let three goals through.

Now playing for Adelaide United, former Victory player Jimmy Jeggo says the reds need to beat Victory if they are serious about winning the title.

“A lot of the boys are looking at it as an opportunity to really stamp our mark going into these last couple of rounds and into the finals … if you want to win the league, you need to win these types of games,” he said.

Melbourne Victory won the previous clash between the teams 3-2 in November but struggled to keep possession of the ball.

United managed to win their last match, but only just with Central Coast Mariners giving them a hard time with their 2-1 win.

The controversial and fake video scene.

A German TV presenter has admitted to faking a video showing Greek Finance Minister Yanis Varoufakis giving the middle-finger gesture to Germany, after the politician vehemently contested its authenticity.

AFP reports that Jan Boehmermann, who hosts satirical program Neo Magazin Royale on public broadcaster ZDF, said he had been waiting since Sunday for someone to ask him if he had faked the controversial footage, but no- one had questioned him.

“Sorry Mr Varoufakis, we won’t do it again,” he said, detailing how a production team had manipulated the video.

The footage showed Varoufakis before he became finance minister speaking at a 2013 event in the Croatian capital of Zagreb.

In the doctored images Varoufakis talks about the problems facing his debt-laden country, and says “stick the finger to Germany” as he makes the offensive gesture.

Greece and Germany, Europe’s paymaster, have been at loggerheads since Greece’s radical-left SYRIZA party came to power in January on promises of ending austerity and erasing most of the country’s massive debt.

The footage, originally shown during the Guenther Jauch weekly talk show on Germany’s ARD channel late Sunday, prompted an immediate and vehement rebuttal by the maverick Greek minister, who was a guest on the program.

Varoufakis, who took part in a live discussion with other guests via a link from Athens, insisted on air that the video had been “doctore”.

Jauch’s show, which draws millions of viewers, said on Monday it had seen “no indication whatsoever of manipulation or falsification in the video shown
during the live show”.

It said the video was being further checked by experts.

However, Boehmermann said on Wednesday his team had doctored the footage in late February, and described manipulating shadows to make the changes more realistic.

ZDF did not confirm his statement but retweeted a link to his confession. 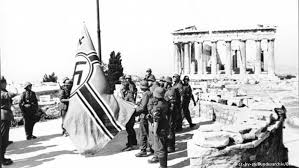 Couple say they wanted to make up for their government’s attitude.

A German couple visiting Greece were hailed as heroes by the local press Wednesday after paying 875 euros ($945) to a town hall in what they said were World War II reparations.

“They came to my office on Tuesday morning, saying they wanted to make up for their government’s attitude. They made their calculations and said each German owed 875 euros for what Greece had to pay during World War II,” Dimitris Kotsouros, Nafplio mayor, told AFP.

The mayor of the seaport town where the tourists deposited their cheque, said the money has since been donated to a local charity.

He said they chose his town “because it was the first capital of Greece in the 19th century.”

Greek media reports named the pair as Ludwig Zacaro and Nina Lahge. They say he is retired, and that she works a 30-hour week. They did not have enough money to pay for two, one paper said.

Athens is struggling under a crushing debt mountain that amounts to around 175 percent of the country’s annual economic output.

The country has long claimed Germany owes it payment for a forced wartime loan and other reparations, and Prime Minister Alexis Tsipras recently said Greece had a “moral obligation” to claim payment.

Nearly 70 years have passed since the end of the war during which the Nazis occupied Greece for four years and forced the Greek central bank to give the Third Reich a loan that financially ruined the country.

The dispute has grown in intensity because of tensions between Athens and the rest of the eurozone as Germany leads demands for economic austerity that Greece and other southern European countries are struggling to handle.

Figures from some sources in Athens put the amount still owed by Germany at around 162 billion euros ($183 billion), or more than half the level of debt that Greece is currently struggling with.

Startup Daily’s list of Top 50 Women Entrepreneurs in Australia under the age of 40 has been dominated by the success of Greek Australian women.

Five Greek Australian women have been recognised in Startup Daily’s annual list of the Top 50 Women Entrepreneurs in Australia under the age of 40.

Released just in time for International Women’s Day, Greek Australian Jess Hatzis took out the top spot as one of the co-founders of Frank Body.

The unique skin care range made from coffee not only has a revenue of over $20 million, but has been recognised for its impressive use of social media.

Born and raised in Athens, the entrepreneur ventured out to Australia six years ago to pursue her postgraduate studies at Melbourne University.

While studying and with the motivation of those closest to her, Markogiannaki developed website WeTeachMe – a community-based platform for new and upcoming entrepreneurs looking for tips and advice on developing and promoting their businesses.

After only a few years of hard work, she is now being recognised for her success in meeting a demand in the Australian business market.

Although the list takes into consideration financial turnover and capital raised, the deciding panel also look a number of aspects including the influence the company holds socially and within its respective industry, its mission and current traction.

Other Greek Australian women on the list were Brisbane-based Thessy Kouzoukas and Yiota Karalouka of online fashion sensation Sabo Skirt, ranked at number three; and Charlotte Petris from InvoiceBid ranked as the 50th female entrepreneur.

The parade will officially commence at 1.00 pm.

Schools, parents and officials getting ready to mark Greece National Day on March 25.

Thousands of students are expected to take part in a parade at the Shrine of Remembrance to commemorate Greek National Day on Sunday 29 March, 2015.

Schools, parents and officials will gather in Melbourne to pay their respects to the heroes involved in the uprising against the Ottoman Empire on March 25 1821, marking the day that Greece was liberated from 400 years of Turkish occupation.

The parade will officially commence at 1.00 pm, with participants required to assemble by noon.

For all enquiries, contact general secretary Kon Kontis on 0412 312 412 or email greeknationalday@gmail.com

A strong campaigner for multiculturalism and a Philhellene:Malcolm Fraser remembered 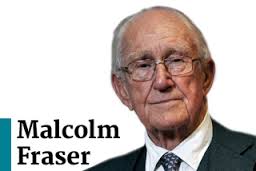 A strong campaigner for multiculturalism and a Philhellene, former prime minister Malcolm Fraser has died aged 84.

Hundreds have come forward to honour former Australian prime minister Malcolm Fraser, who died on Friday morning at the age of 84 years.

Malcolm Fraser served as prime minister of Australia from 1975 to 1983, leading the Liberals, and was among other things, a great humanist and philhellene.

It wasn’t until the coup of 1975 by Governor General Sir John Kerr -who overthrew the elected Whitlam Labor government- that Fraser rose to power. That alone, was enough of a reason for the vast majority of Greeks to join the protests against him.

But as prime minister, Malcolm Fraser embraced multicultural policies his predecessor implemented, and worked to bridge the relationship with the Greek community.

With his Greek Australian advisor, Petro Georgiou, who later became director of the Liberal Party of Victoria and a federal Liberal MP, he legislated for the establishment of multiculturalism.

Fraser founded the multilingual public broadcasting service that later on became the Special Broadcasting Service (SBS), the Australian Immigration Institute that conducted surveys and hosted programs for the integration of the national minorities of the country, and decided to state-fund the teaching of the students’ native languages in schools with a big migrant population.

After his defeat in 1983 by the Labor Party led by Bob Hawke, Fraser became an even more driven and dedicated activist, becoming one of the first politicians who fought to end apartheid in Africa.

The protection of refugees has always been a priority to him, working with many organisations to champion their rights.

All this time Mr. Fraser has been openly supporting the diaspora and Greece on many issues.

Hence, he was honoured by the Greek Republic with a special medal, as did his ‘great’ opponent Gough Whitlam, with whom he later join forces in many common struggles.

The former enemies participated together in protests to end the Turkish occupation of Cyprus, whilst heading the committee for the return of the Parthenon Marbles.