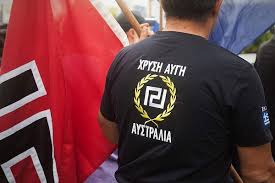 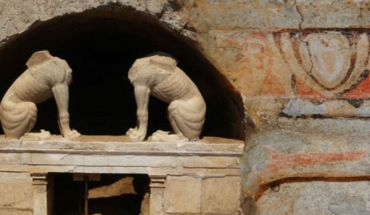 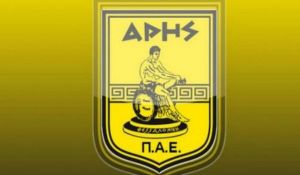 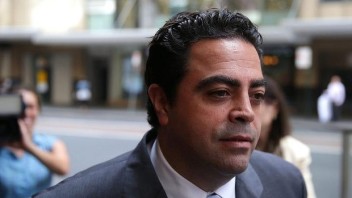 It was the $10 million question at a corruption inquiry: “What’s in it for Joe Tripodi?”

Explosive evidence suggests the corrupt former Labor MP and his colleague Eric Roozendaal went out of their way to facilitate the approval of a coal terminal for embattled coal mogul Nathan Tinkler in Newcastle.

“Tell me, what’s in it for Joe Tripodi?” Geoffrey Watson, SC, said.

“Nothing’s in it for Mr Tripodi,” Mr Sharpe replied.

Mr Sharpe agreed the coal loader was worth “tens of millions of dollars” to the company. The ICAC heard that Mr Tinkler’s property development company Buildev spent thousands of dollars flying Mr Tripodi, then a humble backbencher, to Newcastle in the coal mogul’s helicopter to seek his advice.

“What other politician could you have called upon, flown up to Newcastle, [who would] do you a favour along those lines, Mr Sharpe?” Mr Watson asked.

“There isn’t one, is there?” Mr Watson said.

According to the Buildev notes, written by Mr Sharpe after the November 2010 meeting with Mr Tripodi, the then Labor MP was “going to get Eric to stop” a rival deal to Mr Tinkler’s coal terminal going to a government board for approval.

The notes also reveal a plot in which Mr Roozendaal would remove the land from the control of a state-owned company and deliver it to the Tinkler group.

The memo, entitled “Joe notes”, described the then ALP powerbroker as Buildev’s high level adviser. The notes also set out Buildev’s plan to approach corrupt former planning minister Tony Kelly and corrupt bureaucrat Warwick Watkins to see if they were “still on side”.

The inquiry has previously heard that Mr Tinkler’s proposal was against government policy and was not supported by the then Labor MP for Newcastle, Jodi McKay.

Mr Sharpe admitted that Buildev illegally funded an anonymous “dirty tricks” campaign against Ms McKay to oust her from the seat.

One part of the campaign, in which Mr Tripodi allegedly played a crucial role, was an anonymous flyer campaign against Ms McKay.

Mr Sharpe said he had made a “bad choice of words” when he congratulated Buildev co-founder Darren Williams on the smear campaign and urged him to “kick the shit out of her [McKay]”.

Text messages from Ann Wills, a Buildev consultant and longtime ALP staffer described as Mr Tripodi’s “eyes and ears” in Newcastle, referred repeatedly to Ms McKay as a “bitch”.

She told Mr Williams in one message that she was “on my way home to put the bitch in the freezer!”

She said this was a jocular reference to controversial former federal Labor MP Belinda Neal’s reported habit of putting photos and names of her political enemies in the deep freeze.

Ms Wills gave one suggestion as to what Mr Tripodi might have gained from assisting Mr Tinkler’s company in the months before the March 2011 election, which swept Labor from power.

“You knew that after the election Mr Tripodi hoped to get a retainer or some position assisting Buildev on the proposal, didn’t you?” Mr Watson asked.

Can Liverpool down Manchester City? 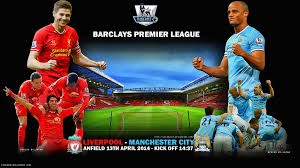 When his Liverpool side take on Manchester City at the Etihad Stadium on Monday night, Brendan Rodgers is hopeful of an open contest that will allow such talents to shine.

Liverpool’s front three of Philippe Coutinho, Raheem Sterling and Daniel Sturridge, deployed last weekend against Southampton, are set to start again, with the latter two on target in a 2-1 opening win at Anfield. Rodgers is looking at them to be as effective against the Barclays Premier League champions.

“If you look at both sets of players, there’s lots of invention and creativity – both teams will be creative and want to score goals,” Rodgers said. “We know we need to be compact and solid when we haven’t got the ball, we need to be aggressive and press well. That’s the nature of our game.

“We know we have the freedom, movement and pace that can hurt teams. We understand it’s early on, but it’ll be a good game for sure. It’s been a great start to the league campaign.”

The last time the teams met competitively, Liverpool secured a gripping 3-2 victory on Merseyside that looked to have tipped the balance of last season’s title battle in their favour. But City held their nerve, as Rodgers’ men dropped points against Chelsea and Crystal Palace, to win a second Barclays Premier League crown in three seasons by two points.

Both sides flexed their muscles in a pre-season joust in New York, when Liverpool twice came from behind to win on penalties. By that time, Luis Suarez had completed his big-money move to Barcelona, a loss that City manager Manuel Pellegrini believes will be keenly felt by a Liverpool squad he still rates very highly.

“I watched Liverpool’s game [against Southampton] and we played against them in the United States,” he said. “We know what they are doing.

“It’s difficult to say after one game but Liverpool will always miss Suarez, he was a very important player. They have brought a lot of important new players and continue being a very strong squad also.”

City remain without striker Alvaro Negredo due to a broken foot, but Pellegrini has increased options elsewhere as his returning World Cup stars build their fitness. Pablo Zabaleta or Bacary Sagna are likely to displace Gael Clichy, who featured at right-back in their opening 2-0 win at Newcastle United.

Sergio Aguero came off the bench to complete the scoring at St James’ Park and will push Stevan Jovetic for the starting berth alongside Edin Dzeko in attack. New signing Eliaquim Mangala is not yet fit to play. 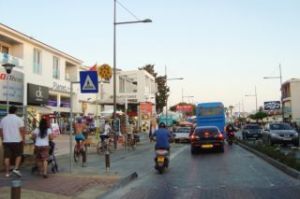 Tourist arrivals increased by 5.7 per cent in July, Cyprus’ Statistical Service said this week, announcing also an important increase of 11.4 per cent in Cypriots’ trips abroad.

The figures showed an increase of 5.9 per cent in tourist arrivals in the first seven months of the year.

Amphipolis tomb unlikely to have been looted 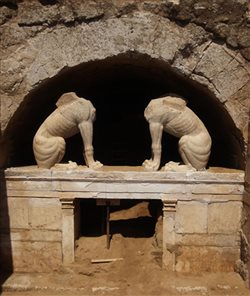 The massive stones sealing the entrance to the Hellenistic era tomb unearthed at the site of Ancient Amphipolis in central Macedonia must have protected the find from grave robbers, the archaeologist supervising the excavation said last week.

“It’s difficult for such a grave to have been plundered,” Katerina Peristeri said during a briefing of a nine-member delegation from the leftist opposition SYRIZA party on the progress of the dig.

The delegation, led by the party’s MP responsible for cultural issues, Anna Hatzisofia, was not allowed to enter the tomb, which is the largest of its kind ever discovered in Greece.

Ms Peristeri urged the authorities to do everything to help their work, describing the grave as a “unique” find of “global significance.”

But she said it would take time before archaeologists could be sure of what lies inside the tomb.

“We are like surgeons. We proceed very slowly. The excavation will show us what lies inside.” 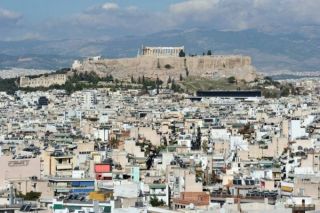 The overtaxation of property is suppressing the potential of an economic recovery, which could have been achieved as far back as the first quarter of 2013 had faulty and detrimental property taxes not been imposed, Alpha Bank highlights in its newly released weekly report.
The bank notes that economic irregularities have been caused by two coinciding property taxes in 2014, these being the existing so-called FAP tax imposed on property valued at over 300,000 euros, and the newly introduced ENFIA property tax, currently undergoing revisions before payments begin, most likely in late September.

In its report, Alpha also notes that the nominal property value levels being used by tax authorities to calculate property taxes are well above actual market values, which is playing a major role in restraining the country’s economic activity.

“Economic recovery and greater employment growth are being catalytically obstructed at present by two very significant and crucial taxation errors that are contributing considerably to the further reduction of activity in the real estate market, from levels that are already low,” Alpha stresses in its report.

The bank goes on to state that such policies are further damaging taxpayers’ already dented willingness to cooperate, ultimately depriving the state of significant tax revenue decreases, rather than increases, as is desired.

Alpha estimates that the aforementioned property tax errors deprived the country’s GDP figure of 1.26 percentage points during the first quarter of 2014, as well as a further 0.8 per cent in the second quarter.

Despite the concerns expressed in the Alpha report, it does point to some encouraging news on the economic growth front. The bank is forecasting year-on-year GDP growth of between 1.5 and 2 per cent in the second half of 2014, following a growth rate of 0.6 per cent in the first half of the year.

GDP growth in the second half of 2014 would be supported by factors such as a significant increase in exports of products and services, as well as major gains in the sectors of tourism and shipping, according to the Alpha report.

Meanwhile, in a report of its own, Eurobank highlights that there is no leeway for any fiscal slackening, while adding that the achievement of a primary surplus of 1.5 per cent of GDP for 2014 is attainable.

The bank, however, does warn that a series of factors need to be overcome if threats to budget target figures are to be avoided. The threats cited by Eurobank included court decisions obliging salary refunds for certain professional groups, as well as the severe impact on the taxpaying ability of citizens as a result of the deep recession in Greece over the past six years.

Two Greek Australians are amongst the 75 most influential people in Australian television, according to an informal list compiled by a Fairfax Media panel of experts and released earlier last week.

The list draws together the network bosses, the players, the indie producer partnerships, and the contract men, with the artisans, the deal-makers and the agents.

With a 13-year-reign as chief executive of the Australian News Channel business under his belt, Angelos Frangopoulos, 48, now has another five separate channels under his control in Australia and New Zealand.

He oversees over 200 staff developing video content for a multitude of screens.

Having started his media career in the 1980s as a reporter at Prime News in Orange, Frangopoulos joined Australian News Channel soon after its inception in 1996 when he returned to Sydney from a stint at BSkyB in London.

Joining Frangopoulos on the list of the powerful players were Rikkie Proost, executive producer of My Kitchen Rules and Brian Walsh, director of television at Foxtel.

Director Peter Andrikidis, the pioneer who brought film-standard direction to the small screen, was amongst the most influential artisans in television industry, with his recent credits including Fat Tony & Co, Janet King and Serangoon Road. 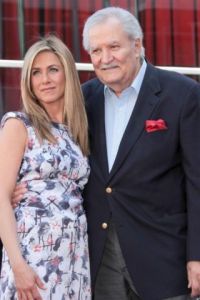 Jennifer Aniston says “my dad is 100 per cent Greek; he turned 81 and he barely has a wrinkle”.

It is not an expensive make-up artist or the best Hollywood stylists that make Jennifer Aniston look young at 45. As the Friends star admitted in her recent interview – it is her Greek heritage to blame.

Jennifer Aniston revealed a lot in her interview with Yahoo Beauty editor Bobbi Brown – including her weight, and secrets about her hair, staying youthful looking and even what she’s eating.

The actress, daughter of the 81-year-old John Aniston, best known for his long-running role of Victor Kiriakis on the soap Days of Our Lives, revealed that her Greek DNA is a big part of the secret.

“My dad is 100 per cent Greek; he turned 81 and he barely has a wrinkle. And neither did my grandmother, who was 95 when she died.”

Taking a page from the well-known Greek expression “everything in moderation”, Aniston also added, regarding a question about her eating habits, “I have a Greek salad in front of me, but I also indulge. Oh my god, there’s a balance.”