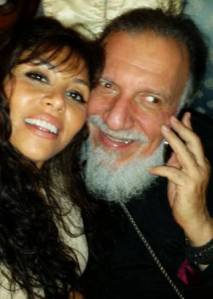 Rev George Passias and Ethel Bouzalas, who converted to the Greek Orthodox faith when Passias baptised her while she wore a bikini before her wedding. Photo: The New York Post

Former chancellor of the Greek Orthodox Archdiocese of America, Father George Passias has been removed from his parish after the revelation he had an affair with his much younger god-daughter.

The high-ranking Greek Orthodox priest starred in several kinky sex tapes with Ethel Bouzalas, a Peruvian woman married to a Greek man with whom she has three children.

Passias baptised the woman before she married Tom Bouzalas and has been her mentor since.

When Passias took the helm of the Wadsworth Avenue church in 2006, Bouzalas came with him as his assistant.

He called her his ‘spiritual goddaughter’, and they arrived and left together every day.

Within a few years she was promoted to parish-school principal, even without having proof of education.

The 67-year-old Washington pastor, who has four children from his marriage impregnated his 45-year-old also married lover who also assumed church treasurer duties.

Meanwhile, Passias spurred furore when he imposed his strict rules to all women of the parish who were forced to cover their heads with long shawls.

In 2013, Passias had been accused of having an affair with the women who was reportedly seen sitting on his lap.

“I walk out one night and his so-called assistant was sitting on his lap in his office,” Harry Torres, a former church handyman and superintendent said.

He had then told the The Post that “the allegations were cooked up by a group of evil-minded people” of the parish who wanted him gone.

“They have been saying I’m having a private affair with her,” he said. “She is a goddaughter to me. That’s it.”

Several, members of the parish were worried about the management of four church-owned apartment buildings and a constant flow of funds being allocated into repairs at the school which never happened.

The priest had once again denied everything calling the allegations “filthy lies.”

The firm that managed the church’s four apartment buildings, worth $15 million, was replaced with one tied to Alma Bank, where the church turned for cash and a mortgage refinance totaling $2.5 million in 2009.

Asked why the church had ignored the longtime allegations of the affair, the bishop said, “Lacking any concrete evidence of an affair, there was no responsible way the church could take any further action.”

However, Ethel Bouzalas’ husband came forward and provided the Greek Orthodox Archdiocese of America, with proof of the affair.

The same cleric who had once ordered female worshipers to cover their heads during confession, starred in shocking sex videos, without a hint of modesty.

In one scene, he watches his ‘god-daughter’ crush a banana bread with her bottom on top a bedside table, wearing stilettos.

In another video Bouzalas rubs her feet on the priest’s face whilst recording him and then he performs oral sex on her.

The videos and photos of the pair were provided anonymously to The Post last week with a letter saying they were downloaded off a computer in Passias’ church office.

The sender wrote that a private investigator had been hired to tail the couple to their rendezvous in motels in New Jersey and upstate Cold Spring.

Bishop Andonios Paropoulos, the current chancellor of the Greek Orthodox church in the United States, was the first to disclose the affair, after Ethel Bouzalas’ husband, e-mailed him.

Following the revelation Passias was suspended on 16 September “as per the sexual-misconduct policy of the archdiocese.”

Bishop Andonios told the newspaper he had not seen the sex tapes however he “found out of their existence during meetings with both parties.”

Passias then sent an e-mail to his parish saying he was leaving for “personal and health reasons,” whilst confessing to “multitudinous sins and shortcomings.”

“I will now fade out of this world for a considerable time according to God’s will,” he wrote. “He has chosen for me . . . that I should retire and follow the way of silence, prayer, fasting, and ­utter devotion to our Lord.

“Please do not ask where I am going and where I will be. Then it would not be possible for me to fulfill what is my lot.”

Parishioners at the Manhattan church showed little support on Sunday for their disgraced former pastor, who got the boot for knocking up his married goddaughter.

The pews were emptier than usual Sunday at St. Spyridon Greek Orthodox Church in Washington Heights, which was led by the Rev. George Passias before his downfall.

“He used to be a good priest, he talked nice and everything. He got people into church,” said Nicholas Karaniaks, 68, who has been praying at St. Spyridon over the past 36 years.

“Now it’s more empty, because the scandal scares people away.”

“I had no idea this was happening,” Papadatos said. “Everyone’s shocked.”