It wasn’t long after a teenage John Anastasiadis made the move from Melbourne to Greek club PAOK Thessanoliki that he realised the enormity of what he had achieved.

“When I first got [to PAOK] we were drawn to play Napoli [in the UEFA Cup],” Anastasiadis recalled to www.socceroos.com.au.

“Obviously it meant the great [Diego] Maradona was coming to our ground. To rub shoulders with arguably the greatest player at that time was mind blowing.

“I couldn’t believe that one month prior I had Maradona on my bedroom wall and here I was about to play against him. It was crazy.”

Much like Anastasiadis’ rise from the National Soccer League in the late 1980s to his dream move abroad.

The Melbourne-born striker had played just a couple of years with Heidelberg United before PAOK came calling, taking him across the other side of the world at just 19 years of age. “It was a great time in my life and I was blessed to fulfil a boyhood dream to play overseas,” Anastasiadis added. “Whilst it wasn’t all plain sailing, it taught me a lot about life in general. “With that it kept me in good stead as I was growing up.” In all, Anastasiadis made almost 400 appearances for PAOK in all competitions over nine years in Greece – scoring 66 goals – before deciding to move back to Australia in 1997 to play with South Melbourne.

He enjoyed immediate success with South – under current Caltex Socceroos boss Ange Postecoglou – in the NSL, helping the club win back-to-back titles in his first two seasons. Anastasiadis scored vital goals in both grand final triumphs, including one in the 97-98 decider past his brother Dean, who was in goal for Carlton. He also represented South at the FIFA Club World Championships in 2000, scoring their only goal of the tournament against Mexican outfit Necaxa.

Having been coached by Postecoglou during those glory days with South Melbourne, Anastasiadis isn’t surprised by the impact his former mentor has had on the current crop of Socceroos. “He [Postecoglou] has widened the net to give basically nearly every Aussie boy playing overseas a chance which is fantastic,” said Anastasiadis, who coaches Bentleigh Greens in the Victorian PS4 NPL1 these days. “It speaks volumes about the man that, if you want to wear the shirt, truly want to, well here is your chance. “The culture he has created is that wearing the Green and Gold is a privilege, and with that performances get better because of the competition for places. “I am sure we will see more success with Ange at the helm.”

The next assignment for Ange’s army is against the country of both his and Anastasiadis’ family background. The Caltex Socceroos host the Greek national team in the two-game Dodoni Series, starting in Sydney on June 4, followed by a match in Melbourne on June 7. “From a fans point of view, it’s fantastic for the diaspora. They get another chance to see the new stars of the Greek team. “I think the Greek team is in transition at the moment but individually they have some excellent players which is evident that most of these players are playing in the top leagues. “It will be good for Australia to play against a quality side in preparation for the World Cup qualifiers.” 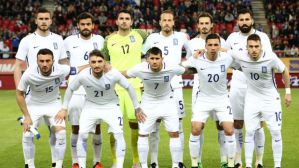 As for a prediction Anastasiadis said: “Greece play very defensive and are well organised and structured, so for us it will be difficult to break down. “We just have to keep the ball moving quickly to try and catch them out. “I think there will only one goal in it but I will say 1-1, just to keep the peace at home as my wife is from Greece.”