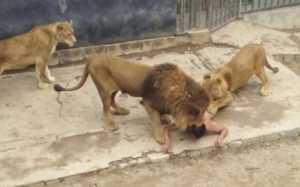 TWO lions were killed after they severely mauled a man who stripped naked and entered their enclosure in an apparent suicide attempt at a zoo in Chile, authorities said.

The man was taken to a nearby hospital for treatment and was said to be in grave condition.

Director Alejandra Montalba of Santiago’s Metropolitan Zoo told local media the park was crowded with visitors at the time of the incident.

The 20-year-old man broke into the enclosure, took off his clothes and jumped into the middle, horrifying other visitors who witnessed the attack. Zookeepers killed the two lions in order to save his life.

“The zoo has an established protocol because people’s lives are very important to us,” said Montalba, adding that there were no fast-acting tranquillisers available to stop the lions from mauling the man. She said she was “deeply affected” by the deaths of the two lions, a male and a female.

The man grapples with the male lion inside the enclosure Credit: NoticiasChelmevision