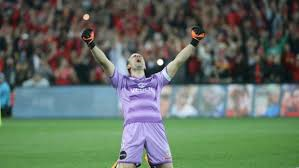 It’s taken seven long years since the last grand final defeat, and nine since its grand final humiliation, but finally Adelaide United has wrested the monkey off its back.

Rightfully, deservedly and without any argument, Adelaide are the Australian champions, having disposed of the Western Sydney Wanderers’ challenge in front of a packed house at the Adelaide Oval on Sunday afternoon.

It was a game that Adelaide, with their fluid, slick game, looked to be dominating when they raced to a 2-0 half-time lead.

But when the Sydneysiders pulled a goal back in the second half, Guillermo Amor’s team had to show its reserves of steel and mental strength alongside the footballing smarts it has displayed all season to see it through, Pablo Sanchez’s late sealer giving them a comfortable enough 3-1 margin.

Thus, the footballing gods have once again shown that league form is invariably the best guide to a finals series.

Adelaide won the Premier’s Plate and have justified their No.1 seeding by winning their home semi-final easily (against Melbourne City) and then holding off the late challenge from Tony Popovic’s men.

What better place, and in what better style, than to achieve atonement and dispel the ghosts of grand final defeats past than in the famous old stadium?

The Oval has hosted cricket Tests, Socceroos internationals, AFL blockbusters and footy finals games, so the fact that the team from the City of Churches was able to fulfil its potential in the cathedral of South Australian sport was entirely appropriate.

This triumph will surely now banish the heartache and heartbreaking memories of previous defeats.

The 6-0 loss by a 10-man Adelaide to Melbourne Victory in the grand final of the A-League’s second season may never be erased. And the disappointment of their previous defeat, a 1-0 loss also to Victory in controversial circumstances when Reds striker Cristiano was sent off early in the game, still lingers.

But this triumph will ease some of the embarrassment from that first loss and put the second narrow defeat in perspective.

Perhaps the only thing that could have been better for South Australian fans than winning their first grand final at a sun-bathed Oval in front of a packed, partisan crowd, would have been if their opponents had been Victory, not Western Sydney!

There was a perfect sense of symmetry about this game, too: the last time an Adelaide side won the national soccer title was in 1994, when Zoran Matic’s Adelaide City saw off the Melbourne Knights in an NSL title decider. The date then was May 1, 22 years ago to the day of this triumph.

The Reds have been the story of the A-League season on every level, providing a narrative that has grown in substance.

It wasn’t an easy start under new coach Guillermo Amor, the former Barcelona midfielder, who won the European Cup in 1992 and numerous La Liga titles as part of a Barca team touched by the coaching magic of the legendary Johan Cruyff, the Dutchman who died earlier this year.

Amor had been part of the coaching staff at Hindmarsh under previous boss and compatriot Josep Gombau, but did not make a seamless transition to the head coaching role.

Adelaide struggled to win a game as the team tried to adjust to the tweaks to Gombau’s game plan that Amor sought to implement.

They weren’t playing that badly, but they simply could not get a win. The mood in SA was becoming hostile, the natives were more than restless, and there was talk that Amor could be the first coach to lose his job this season.

But the Adelaide board – which has been trigger happy in the past – this time held their nerve, and their faith in the continuity of the Barcelona school of football has been well rewarded.

The Reds were bottom of the table in late November when they lost to Victory and things looked bleak. But from that point onwards the only way was up.

Since then Adelaide has lost only once – and rarely looked like doing so on almost any other occasion.

This is a reward not just for Amor and his players and the current Adelaide management, but for the South Australian game.

Adelaide lacks the population of Melbourne and Sydney, but it has always pulled its weight in soccer terms, producing numerous players for the national team and stars of its own, none more so than the Vidmar brothers, Tony and Aurelio. It was referred to by none other than the late Johnny Warren, the spiritual father of the Australian game, as the bedrock of Australian soccer.

The game has a solid kernel of support and a knowledgeable and committed fan base, one which, it is to be hoped, the Adelaide brains trust can now build on.

In Hindmarsh they have got one of the best “right-sized” A-League stadiums in the country, intimate and intimidating for opponents, comforting and supportive for the Reds.

Now they have the best team – officially.

Next year will be harder. The champions always have a target on their back.

But Amor and his crew, laced with Latino flair with three Spaniards and an Argentine in the line-up, know what it takes to stay on top. They will relish the challenge.