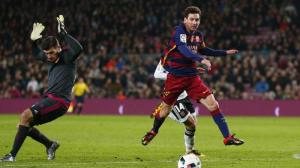 Suarez scored in the seventh and 12th minutes, and Messi got on the board in the 29th, 58th and 74th before Suarez closed the scoring in the 83rd and 88th minutes.

Messi also hit the post once, and Neymar missed a penalty kick just before halftime of the semifinal at the Camp Nou. The second leg is next week at Mestalla Stadium in Valencia.

“It was one of the more complete games we’ve played,” said Suarez, who has 35 goals in 33 games this season. “We know we have a good advantage now, but in football you never know.”

Valencia, struggling since coach Gary Neville took over less than two months ago, played the entire second half a man down after defender Shkodran Mustafi was sent off for fouling Messi in the play that prompted the penalty wasted by Neymar with a shot into the post.

“Valencia fans didn’t deserve a result like this one,” Neville said. “This is one of the worst experiences I’ve been through in football. We made bad mistakes during the entire match.”

Barcelona’s ninth win in a row kept alive the team’s 27-game unbeaten streak in all competitions, one shy of its all-time record. It hasn’t lost a game since a 2-1 result at Sevilla in October in the Spanish league. The Catalan club went 28 games without a loss in the 2010-11 season.

Barcelona has outscored opponents 30-3 in its last seven games at the Camp Nou.

The hosts opened the scoring after Neymar helped steal a ball near midfield and set up Suarez’s low cross shot from inside the area. Suarez added his second from near the penalty spot after assists by Sergio Busquets and Aleix Vidal.

It was Suarez who set up Messi with a back-flick pass for the fourth goal, and Messi cleared two defenders inside the area before finding the net. He got his hat trick with a left-footed shot after Valencia defenders failed to clear a ball in front of the goal.

Suarez capped his spectacular night with a right-footed shot from inside the box, and a late header.

Suarez and Messi spent the final part of the match trying to set up Neymar, but he wasn’t able to find the target.

“We kept looking for him after he missed the penalty,” Suarez said. “We know that in the end he is happy for the team.”

Valencia complained about the penalty kick call, claiming Mustafi caught the ball before touching Messi’s leg inside the area.

Newly signed Valencia striker Denis Cheryshev had a goal disallowed for offside after coming off the bench in the second half. Cheryshev was ineligible when he played for Real Madrid earlier in the competition, leading to the team’s disqualification.

Valencia players said before the match that their main goal coming into the Camp Nou was to avoid a rout and stay alive for the second leg at Mestalla. The Copa del Rey is the only competition Valencia has a chance of winning in what has been a dismal season. The team hasn’t won in 11 league games, eight of them under the command of former England player Neville.

Meanwhile, Atletico Madrid left-back Filipe Luis has been handed a three-game ban for his dangerous challenge on Messi on the weekend.

Racist chanting halted play at the Stadio Olimpico on Wednesday as hosts Lazio suffered a 2-0 defeat that kept visitors’ Napoli’s sterling Serie A season on track.

Goals by Gonzalo Higuain, the Argentine’s 23rd in as many league games, and Jose Callejon combined to keep Maurizio Sarri’s men top of the table with a two-point lead on champions Juventus.

But the game was marred by a three-minute suspension in the second half on the orders of match officials for racist and insulting chanting aimed at Napoli’s Senegalese defender Kalidou Koulibaly.

Higuain is bidding to beat Gunnar Nordahl’s all-time Serie A record of 35 goals in a single, 20-team season (1950) and after spurning an early chance was soon into his stride, thanks to a slice of fortune.

The Argentine ran on to Callejon’s through ball on 24 minutes only to see Federico Marchetti come out to block, but as the ball bounced up Higuain chested it home.

Juventus had a Sebastian De Maio own-goal, from Juan Cuadrado’s angled strike, to thank for a 1-0 win over Genoa and a 16th win of the campaign amid what is set to be a tough month of competition on three fronts.

Inter Milan looked to be heading up to third place after hanging on to Mauro Icardi’s strike early after the restart to secure a 1-0 San Siro win over Chievo.

But Fiorentina striker Mauro Zarate, who joined the club last week from West Ham, came off the bench to hit an injury-time winner and secure a last-gasp 2-1 win for Paulo Sousa’s men over Carpi after Kevin Lasagna had levelled Borja Valero’s early opener for the hosts.

AC Milan’s recent revival continued three days after their spectacular 3-0 derby win over Inter with a precious 2-0 win at Palermo thanks to Carlos Bacca’s strike and a 33rd minute penalty from M’Baye Niang.

Roma, 2-0 winners at Sassuolo on Tuesday, are fifth at 12 points behind with Milan just two points adrift in sixth.

Paris Saint-Germain established a new Ligue 1 record on Wednesday as they stretched their unbeaten streak to 33 matches by easing past Lorient 3-1 at the Parc des Princes.

Edinson Cavani was given a rare start by Laurent Blanc and justified his manager’s decision by opening the scoring in only the sixth minute.

Lorient struck back midway through the first half with a well-worked equaliser from Raphael Guerreiro.

The defending champions forged ahead again though with a Zlatan Ibrahimovic goal 10 minutes after half-time.

PSG were not at their fluent best, but Layvin Kurzawa made it three with an excellent strike.

Earlier, Alexandre Lacazette struck twice as Lyon secured a welcome 3-0 win over Bordeaux for just their second victory in 11 matches.

Lacazette struck four minutes prior to half-time at Parc OL before quick-fire goals from Lacazette and Aldo Kalulu late on ensured Bruno Genesio’s side put an end to Bordeaux’s seven-game unbeaten run.

Lyon climbed back into the top half of the table, above 10th-place Bordeaux on goal difference, and are six points adrift of the Champions League spots.

Nice leapfrogged Angers into third as Hatem Ben Arfa grabbed his 11th goal of the campaign in a 1-0 win over Toulouse, while 10-man Angers were beaten 2-1 at Reims.

Nantes extended their unbeaten streak to 10 matches following a 3-1 victory over Gazelec Ajaccio, Guingamp condemned lowly Troyes to a 4-0 defeat and Lille earned a 1-0 win over Caen.