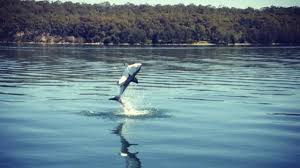 THE iconic Across The Lake Swim, an annual 3.8km-long splash from Coal Point to Belmont to raise funds for local lifesavers since the 1950s, has become the latest shark victim.

For the second year running, organisers have decided to cancel the event because the improving health of Lake Macquarie is attracting an ever-increasing shark population.

Swansea-Belmont Surf Life Saving Club president Graham Burge said his club was there to protect people from danger, not place them in it.

“It is just not worth the calculated risk anymore,’’ Mr Burge said.

“The sharks have always been in the lake, but there is a lot more of them now, and a lot more bigger ones now too.’’

Almost daily dorsel fin sightings, including around the route the swimmers take, as well as advice from authorities, was enough for organisers to change tack.

Instead of the lake swim, they will have an ocean classic off Nine Mile Beach to continue to raise funds for the club.

“You can’t risk it, with the number of people in the water and how spread out they get. If there was a sighting then there would be no way we could get everyone out,’’ Mr Burge said.